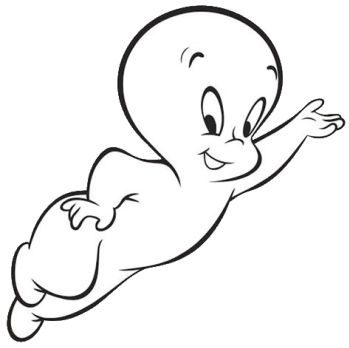 One ghostie you should definitely giggle at.
"Casper, the friendly ghost
The friendliest ghost you know!
Tho grownups might look at him with fright
The children all love him so!"
— The theme song
Advertisement:

Casper, a ghost who wants to be friendly but scares people away, debuted in a 1945 Noveltoon released by Famous Studios for Paramount Pictures, adapted from a children's story co-created by Joe Oriolo. Casper appeared in 55 animated shorts and became Paramount's most popular character after Popeye. In 1958, Paramount sold the character to Harvey Comics, where he frequently crossed over to Richie Rich stories.

The canonical reason ghosts in the Casper stories were designed as they are, is because they are all cartoon caricatures of burial shrouds, a once-common way of burying the dead.

In the Harvey Comics line, Casper lives in the Enchanted Forest with The Ghostly Trio, and met many other supporting characters, such as Wendy the Good Little Witch, Spooky the Tuff Little Ghost, and Hot Stuff the Little Devil.

Casper's television debut was on the ABC Animated Anthology series Matty's Funday Funnies, sponsored by Mattel Toys. The Casper shorts were syndicated during the 1962/63 season, after which they returned to ABC, accompanied by new supporting segments, in The New Casper Cartoon Show. In 1979, Hanna-Barbera produced Casper and the Angels for NBC Saturday mornings, with the voices of Julie McWhirter as Casper and John Stephenson as Hairy Scary. Since 1995, Casper has been the star of a Fox Animated Series (The Spooktacular New Adventures of Casper), an All-CGI Cartoon (Casper's Scare School: The Series), and a series of live-action/CGI films (starting with a feature); one of the direct-to-video movies, Casper Meets Wendy, launched the career of Hilary Duff and another, Casper: A Spirited Beginning that introduces the Big Bad Kibosh. 2009 saw Casper and his two friends Wendy and Hot Stuff return in a Darker and Edgier reboot named Casper and the Spectrals. In 2020, Casper had a guest role in an episode of the fourth and final season of Harvey Street Kids.