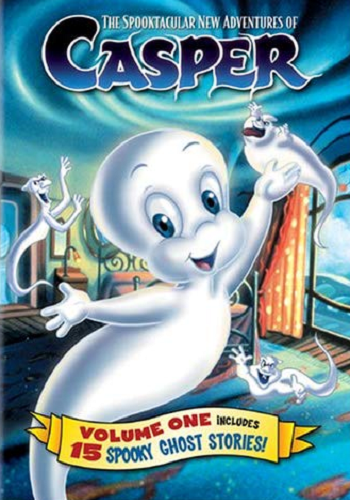 The Spooktacular New Adventures of Casper was an Animated Series that ran from 1996 to 1998, created by Universal Cartoon Studios, and aired on Fox Kids as a modern update of Casper the Friendly Ghost. It was a Sequel Series to the earlier Casper feature film.
Advertisement:

The Spooktacular New Adventures focused on the mishaps of Casper as he haunted Whipstaff Manor with his uncles, The Ghostly Trio of Stretch, Stinky and Fatso; attended the local Ghost School alongside Spooky and "Poil" (Pearl), and shared his home with two living humans; ghost psychologist Dr. Harvey and his young daughter Kat.

The series followed a Three Shorts format, where two longer stories would be separated by a shorter comedic oneshot, often a musical or focusing on secondary characters.