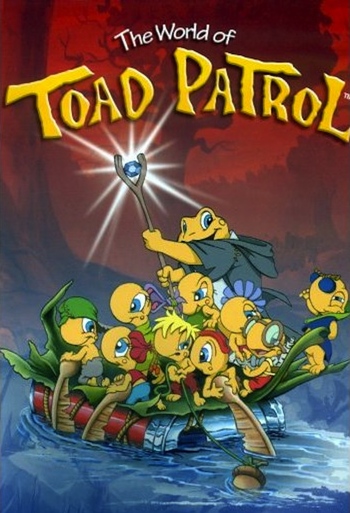 "Listen to the Thunder Trees, Panther Cap. Listen to them well. They will guide you to the Fairy Ring and through it, you will find Toad Hollow."
—Mistle Toad, explaining the plot of the show quite accurately.
Advertisement:

Toad Patrol is a Canadian television series which first aired in 1999 on Teletoon, being one of the earliest shows to be originally produced for the channel (in fact, it was one of the first cartoons greenlit for the network before it officially launched in 1997). It was created by George and his wife, Peggy Sarson and produced by their own studio Toadbag Productions.

According to legend, Toad Hollow is a haven for toads created by the mysterious Ancients. Every year the toads must leave their homeland and follow the clues left by the ancients to find the Fairy Ring before it closes - and almost any toad left behind is transformed into a toadstool. The show follows a group of late born Toadlets who missed the great migration. Unable to figure out what to do, they are greeted by a wandering Toad sage named Mistle Toad. He tells them about the Fairy Ring and how to find it, which is quite difficult since the location changes every year. It is revealed shortly after that the youngest of the eight toadlets, Panther Cap, has the ability to hear what certain "Lightning Oaks" (called Thunder Trees by the toadlets) are saying, and can also home in on these trees telepathically with the use of an acorn.

Although it is primarily aimed at young children, it has found popularity with pre-teens to young adults because despite the fairly young and lighthearted appearance of the show, it had some rather dark undertones beneath the surface. Its cult appreciation has also stemmed from the fact that Toad Patrol had so much time and effort put into it, and it is generally considered a true classic among Teletoon's original series and in Canadian animation.

This series has a very distinct beginning, middle, and end to each season it airs. The story was in the works since 1985 and was in the development stage as the creators started selling Mistle Toad chocolates to raise money. The show eventually managed to get animated overseas in both Korea, AKOM (First Season) and India, UTV Toons (Second Season). Although, a lot of the in-betweening and other works were done in America at Helix studios.

A show sponsor page once stated that 13 episodes of the series were "currently in production". Several fans had assumed that with the passing of Long John Baldry, the series had been halted however, and fans have theorized that if a third season were to appear then another voice actor would have to take over the role of Mistle Toad. However, since the news of the third season was first announced in the early 2000s, the prospect of a new season at this point seems abysmal at best. Not helping matters further is that Michael O'Reilly, the voice of Earth Star, passed away in June 2021, so if a third season were to appear Earth Star would need to be re-cast as well.

That said, the creators - George and Peggy Sarson - don't seem too concerned about the show's third season having been in Development Hell for over 15 years. Soon after the show finished its run, the couple went on to found Run for the Toad, a huge annual marathon in Canada inspired by this show, and one of the largest marathon events in Canada. They used characters from the show for branding and continued to put on the event until 2019 when they announced their retirement. Despite their retirement, the creators have happily kept the show's spirit alive and honored to this day.

Listen to the Thunder Trees, tropers. Listen to them well. They will guide you to the trope page and through it, you will find Trope Hollow: