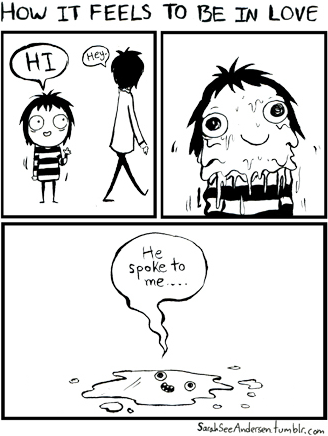 He was scanning the horizon!
Advertisement:

A fairly common staple of Western Animation, this trope involves a character being so enamoured with another, their whole body turns into a puddle of goo. Can be used as the female equivalent of Something Else Also Rises (and often is, as seen in a lot of Warner Brothers 1990s cartoons, like Animaniacs and Tiny Toon Adventures).

Male characters can experience this too, but it's either used as a Censor Decoy if the censors don't want implications of erections to be shown or if the writer wants to move past metaphorically showing an erection or ejaculation and go straight to metaphorically showing an orgasm/post-coital come-down or if the writers want to show that a male character isn't as masculine as he appears to be (this is going by the knowledge that if the Something Else Also Rises trope is shorthand for an erection, then the Lustful Melt is almost always the female equivalent and putting feminine traits in a masculine character is almost always good for a laugh or some character development).

A Sub-Trope of I'm Melting!, Harmless Liquefaction and a (sometimes) Distaff Counterpart of Something Else Also Rises. Contrast Shameful Shrinking.