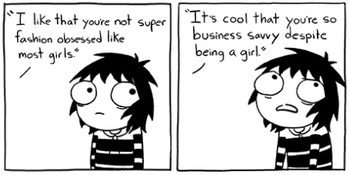 Tywin: Aren't most girls interested in the pretty maidens from the songs? Jonquil flowers in her hair?
Arya: Most girls are idiots.
— Game of Thrones
Advertisement:

On the surface, it's nice to hear someone say you're special. It's flattering to the ego to hear that you're better than the competition. That might be why this line is almost only found in young adult and teen stories. Writers may not expect teens to take subtext or larger social implications into consideration.

However it's meant, this line can be interpreted as a backhanded compliment or even outright Condescending Compassion. By saying that your intelligence, sense of humor, chastity, lack of interest in makeup, independence, or whatever make you "different from other guys/girls," it's implied that your gender is inferior by default (compare You Are a Credit to Your Race).

A more tactful person may ease the blow to feminism by saying she's different from other girls he knows or the kind of girls he usually dates. The inverse of this works as well.

This line is also commonly used with girls with superpowers or some other kind of secret for the irony factor. May also be a Catchphrase of the woman who is Really 700 Years Old but looks like a teenager/supermodel or the Green Space Babe. In these cases, the implications are less unfortunate because it is literally true and not because they are unfeminine but because they have unexpected abilities.

Context is important for whether or not the Unfortunate Implications are present though. When invoked in An Immigrant's Tale, it generally isn't a problem: since the implication isn't that femininity is bad but rather that the speaker's home culture's idea of proper femininity is bad. Usually because said culture doesn't believe in educating women, or teaches girls not to talk much, or the like. The same can apply to stories involving Time Travel. Indeed, Unfortunate Implications can (though do not necessarily) result when this trope isn't used in such stories.

Can also be appropriate when there's a sufficiently large age gap between the girl and the speaker, because then it's not a comment on femininity but rather on the lack of maturity of the speaker's peers: this variant is most commonly invoked by other women (though it can be used by a man).

Sometimes, this term is used verbatim as a pejorative towards gender-nonconforming women by overbearing and reactionary female authority figures, female bullies, and, in more modern works, Straw Feminists. The idea is that if a woman is not stereotypically feminine, she is "like a man" and thus, free game for ostracism and bullying from her peers until she starts acting "normal" (read: feminine). This variation of the trope can sometimes go Up to Eleven and the offending parties can suggest a woman is "not like other girls" because of her race, gender identity, sexual orientation, or disability - meaning they only consider women of their group to be "normal". In the case of the Straw Feminist variant, they believe that if a woman has stereotypically masculine interests or behaviours, or has more male friends than female ones, it must clearly be because she's a Category Traitor who hates her own gender and wants male approval.

On the other hand, using it in a derisive fashion can be valid; if a woman (particularly a Ladette or Nerdy Bully) is using her apathy or disregard for "traditional" femininity as a reason to denigrate other women and/or as a justification for their own internalized misogyny (e.g. "I'm not some dumb Stepford bitch who only cares about taking selfies and keeping up with the Kardashians"), "we get it, you're not like the other girls" is a valid response.

Often said by the Ladykiller in Love, or by a Bigot with a Crush if the bigotry in question happens to be misogyny. Compare and contrast I Can't Believe a Guy Like You Would Notice Me. Related but distinct tropes include Real Women Don't Wear Dresses, Madonna–Whore Complex, Makeup Is Evil, Beauty Is Bad, and Slut-Shaming. A Female Misogynist may describe herself this way—though she's not the only type of character to do so, as women and girls can feel alienated from the rest of their gender for various non-sexist reasons. This trope is one of the most Common Mary Sue Traits, although a character described this way (or who describes herself this way) is not necessarily a Mary Sue. Versions of this can be said by female characters about male characters, and this version can also (though does not necessarily) carry Unfortunate Implications as well. Basically, just be very careful with this one.

For ethnic variants, see The Whitest Black Guy and the aforementioned You Are a Credit to Your Race.

open/close all folders
Anime and Manga
Comic Books
Fan Works
Films — Live-Action
Literature
Faith had always told herself she was not like other ladies. But neither, it seemed, were other ladies.
Live-Action TV
Music Videos
Professional Wrestling
Video Games
Web Animation
Web Original
Western Animation