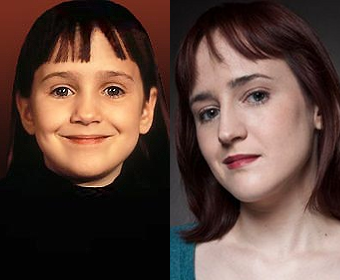 From an adorable child actor,
to a witty writer and storyteller.note And she wields unholy powers from beyond our realm!

Mara Elizabeth Wilson (born July 24, 1987 in Burbank, California) is an American actress and writer. She gained fame in several films in The '90s (best known as the titular character in the feature film adaptation of Roald Dahl's Matilda and Lily Stone in the first Thomas & Friends feature film Thomas and the Magic Railroad), but decided to leave when she realized "film acting is not very fun", in her own words.

She still works in entertainment, but as a playwright after graduating from NYU. She also writes a blog, "Shan’t We Tell The Vicar?

She has also done guest spots on That Guy with the Glasses, revealing that she has unholy powers that she will use to punish those who blindly mock her. According to Linkara, she obtained these powers from God Himself.

She also has a recurring role on Welcome to Night Vale as The Faceless Old Woman Who Secretly Lives In Your Home.

Evidently, she's well aware of the existence of TV Tropes, too, mentioning

Cloud Cuckoolander, as well as a tendency to check this page. (Hi, Mara! We're happy you exist!)

In September 2016 she released her first book Where Am I Now?: True Stories of Girlhood and Accidental Fame.

She is Ben Shapiro's cousin, though the two haven't interacted due to their vastly differing political views since 2003.