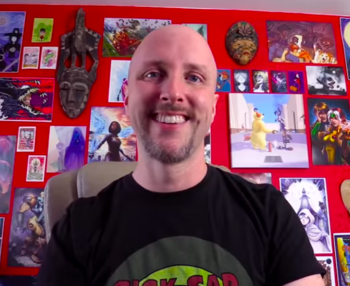 That guy who used to have glasses.
Advertisement:

Douglas Darien "Doug" Walker (born November 17, 1981 in Naples, Italy) is an Internet-based comedian and film critic. He's the first member and face of Channel Awesome, originally being the "That Guy With The Glasses" that gave the site its former logo and name (before that name was used for one of his characters).

His original characters include:

His parody characters include:

Performances outside his own shows: