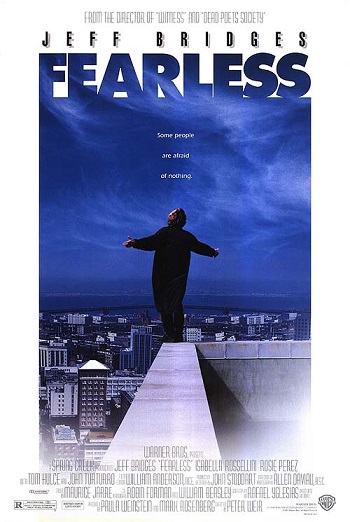 Some people are afraid of nothing.
Advertisement:

Fearless is a 1993 film directed by Peter Weir, based on the novel by Rafael Yglesias. Told in flashback format, the story centers around a plane crash survivor who loses his fear of death during the disaster and becomes unable to relate to the living, including his own family, as a result.

Max Klein (Jeff Bridges) and his business partner are on a flight from San Francisco to Houston when the plane suffers a catastrophic hydraulic failure and crashes in a cornfield near Bakersfield, CA. Many passengers die in the fiery wreck, including an infant belonging to Carla Rodrigo (Rosie Perez). In the midst of the chaotic aftermath and rescue operation, Max calmly hails a cab and drives away, to be found a day later by FBI agents investigating his disappearance. They return him home to his wife, Laura (Isabella Rossellini) and son Jonah, who are overjoyed to learn that he survived.

Intercut with flashbacks of the flight before and during the disaster, the story revolves around the relationship between Max and Carla after being introduced by psychiatrist Bill Pearlman (John Turturro). Carla, overwhelmed by guilt over the death of her baby, sees no point in living, while Max claims that the crash was the best thing that ever happened to him, though his deteriorating relationship with his family proves otherwise. Unable to relate to anyone else, Max and Carla form an odd friendship that might allow both of them to return to the realm of the living... as long as Max's explorations of his new-found fearlessness doesn't kill him first.

No relation to the 2006 Jet Li movie of the same name.