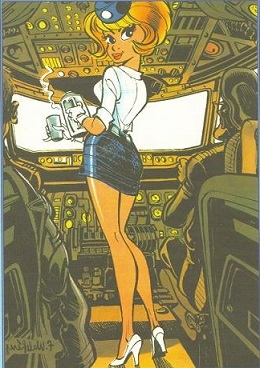 In fiction, flight attendants are depicted young, attractive glamorous, and as having a guy-in-every-(air)port sex lives. The young and attractive part was Truth in Television for a long time, as airlines once insisted on specific physical standards when hiring women for the job, ostensibly for work reasons, but in practice it was to please clients by having pretty staff. In many Western countries, this is no longer legal. A series of US court decisions in the 60's and 70's found airlines in that country liable for grounding flight attendants as they aged, gained weight, married or became pregnant. As well, racial discrimination was not allowed. note "Civil rights laws in the mid-1960s made it illegal for employers to discriminate on the basis of age, sex, or race. Thus, the airline industry had to abandon its preference for hiring young women as well as its no-marriage and no-pregnancy rules and weight restrictions." https://www.prb.org/resources/the-changing-demography-of-u-s-flight-attendants/

In fiction, the Sexy Stewardess may be the main character, but will more often be the male hero's love interest, or will show up as cameos (usually several at a time) to emphasize a given character's wealth or seductive potential. In most cases, expect her skirt to be way shorter than most actual stewardess uniforms, along with high heels for shoes.

Compare Fanservice with a Smile, as well as Fair Cop and Hospital Hottie for two other "life and safety" professions that are commonly fetishized in popular media. For the Real Life history of the trope, see Analysis.Sexy Stewardess.