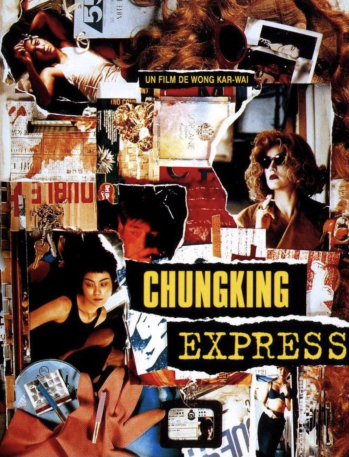 That was the closest we ever got — just 0.01 cm between us. Fifty seven hours later, I fell in love with this woman.
Advertisement:

Chungking Express (重慶森林) is a movie directed by Wong Kar-wai and released in 1994, with an Ensemble Cast including Brigitte Lin, Tony Leung and Takeshi Kaneshiro. Quentin Tarantino loved it so much that he signed a deal with Miramax to start his own releasing company specifically to distribute the movie in the US.

The movie can't be easily summarized, if only because it starts with one story, which it abandons on the way to continue with another. Essentially, each plot follows a Hong Kong cop, and his strange romance with a woman they've just met, but the two ultimately differ in tone and conclusion. Arguably, rather than trying to tell a story, it is a depiction of the cramped, hectic, neurosis inducing, but strangely exciting contemporary life in the city.