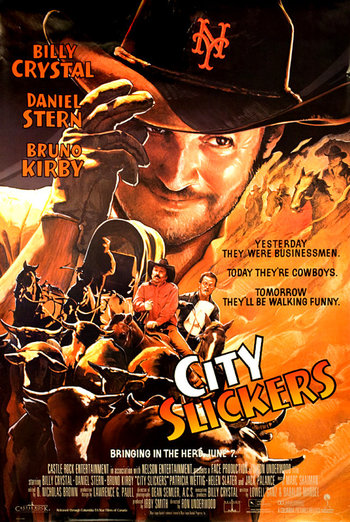 The film is about a group of men experiencing a collective midlife crisis. Mitch Robbins (Crystal) is an advertising manager at a radio station who's increasingly disillusioned with the lack of meaning he sees in his job and his life. Phil Berquist (Stern) is stuck managing his father-in-law's grocery store, while trapped in a sexless marriage with an overbearing wife. And Ed Furillo (Kirby) is a successful businessman and playboy, struggling with the idea of monogamous marriage and the pressure to have kids.

At Mitch's 39th birthday party, Phil and Ed present their joint birthday present: a two-week Southwestern cattle drive for all three men. At the insistence of his wife Barbara (Patricia Wettig), Mitch accepts the gift, traveling with his friends to New Mexico, where they meet the other participants of the cattle drive and learn the ropes of moving the herd, guided by the grizzled, tough-as-nails boss of the whole operation, Curly (Palance).

Jack Palance's performance as Curly won him the 1991 Academy Award for Best Supporting Actor and AFI ranked the film as #86 on its "100 Laugh" list. Followed in 1994 by City Slickers II: The Legend of Curly's Gold, which was not as well-received as the original.