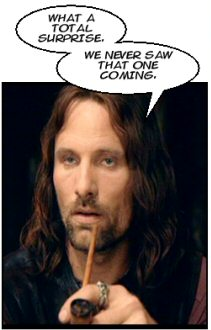 A major announcement is made more dramatic by being said in a matter-of-fact tone.

Brevity, as the Real Life examples show, can be the soul of this trope. Ancient Sparta used it, making this Older Than Feudalism. To say that someone has a "Laconic Wit" is a reference to the Spartan tendency towards this; Sparta was (and is) located in the Greek region of Laconia.