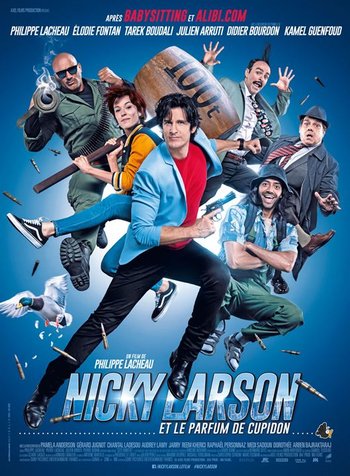 City Hunter: The Cupid's Perfume (Nicky Larson et le Parfum de Cupidon) is a French action comedy and a Live-Action Adaptation of the City Hunter anime and manga directed by and starring Philippe Lacheau. It was released in February 2019. The story is like a classic City Hunter anime episode, and the film is titled Nicky Larson in French after the Protagonist Title of the (more comedic) French dub version of the anime that aired in the 1990snote Ryo Saeba is then named "Nicky Larson", Kaori is named "Laura", Saeko is named "Hélène" and Umibôzu is named "Mammouth". As such, the film is heavy with nostalgia for what French fans call the "Club Dorothée era", Lacheau being a part of that generation himself.note The Club Dorothée was a TV show that introduced a whole generation of French children to Japanese anime and tokusatsu television series like Fist of the North Star, Dragon Ball, Dragon Ball Z, Saint Seiya, Ranma ½, Sailor Moon, Choudenshi Bioman, and of course City Hunter — albeit with heavy censorship and many a Dub Name Change, inconsistencies and hilarious voices at the time.

A client, Mr. Letellier, hires the City Hunter duo to protect the so-called "Perfume of Cupid". When Ryo doubts the perfume's effect, his client (a man in his 60s) uses it on himself and makes Ryo smell it. The effect is almost instantaneous, Ryo falls in love with his client and gradually loses interest in women. Worse, Umibozu barges in and steals the perfume with the countermeasure in it, but the two chemicals then end up in the hands of an unrelated civilian named Mr. Skippy in the ensuing scuffle. To fulfill his job and return to his normal self, Ryo must then follow Skippy's trail as the latter quickly discovers the potential of the perfume. Hilarity Ensues as well as badassery and drama.

Lacheau has talked about his ideas for a sequel project, which could be a crossover with another famous Tsukasa Hojo creation, Cat's Eye. He also had a hand in importing the contemporary anime film City Hunter: Shinjuku Private Eyes in France.

Although in its native language the movie uses the names of the bowdlerised French dub of the anime in the late 1980s/early 1990s, this page will use the Japanese names for the sake of clarity.

The movie got a Japanese release in November 2019 under the name City Hunter - The Movie: The Most Aromatic Mission in History.