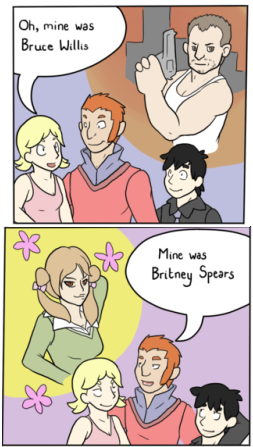 note That second guy? He's got a crush on WereGarurumon.
"CATHERINE ZZZZZZZEEEEETA JOOOOOOOOOONNNNNNZZZZZ!... One day you will be mine."
— The Nostalgia Critic
Advertisement:

They are The Beautiful Elite. Even the ugly ones are usually just Beautiful All Along.

In addition to their attractiveness, the talent — be it acting, singing, or something more strange and out there — is what gets the attention of the media, who then brings it to the hungry viewing world.

Take a gorgeous person, inundate the world with their image, and there's the illusion of closeness and attainability. Never mind that you're Loving a Shadow or that you're at the potential risk of a Broken Pedestal.

Thus people are prone to fall victim to the celeb crush, which can vary from hopeless, depressive mooning to innocent fantasizing to crazy schemes to meet and woo the object of their affections. Taken to the dark extreme, you get Stalker with a Crush on their celebrity.

Teenagers everywhere of both sexes (and no small number of adults) will fall prey to the charms of the hottie du jour.

Happens in Real Life as well as in fiction. Fictional examples can include Yandere, Loony Fan, or Stalker with a Crush, though those can also be Ripped from the Headlines too. They may even be benign crushes, but where's the story in that? The opposite of this trope is Perverse Sexual Lust, where people (somehow) are attracted to fictional characters instead (though it can overlap if a person likes both the character and the person portraying them).

More than a roomful of fans crushing on a celebrity could be a fan mob, which is sort of the inverse of an Angry Mob. Fan mobs tend to want to pepper their crush with kisses while simultaneously ripping off clothing or props for souvenirs. It may also include Starstruck Speechless, if the fan(s) instead become very awkward around the object of their fandom.