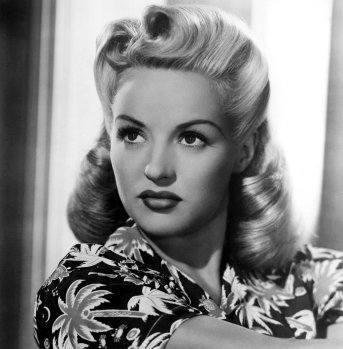 Elizabeth Ruth "Betty" Grable (December 18, 1916 – July 2, 1973) was a famous American actor during The Golden Age of Hollywood. She could sing, she could dance, she could act, and enthrall millions of American men with just her legs.

Grable began her career at the tender age of three: her mother, Lillian, had Hollywood aspirations for her child, putting in her into ballet and dance classes. Able to deceive producers about her daughter’s age, Betty worked as a chorus girl at the age of 13, but was eventually found out and kicked out. Undaunted, however, her mother disguised her age again by dying Betty's hair platinum blonde. This worked and the iconic blonde hair stayed throughout Betty’s career even if it didn't bring immediate success during her early films. She did sign with RKO and appeared in small roles in the Fred Astaire and Ginger Rogers films, The Gay Divorcee and Follow the Fleet.

After being dropped by Paramount, Grable felt like retiring (at 24) even after her appearance in the Broadway production of Du Barry was a Lady garnered some notice. Fortunately, Darryl F. Zanuck liked Grable’s performance in the latter musical and was currently looking for a singing leading lady (since Alice Faye had fallen ill). Grable signed with 20th Century Fox, and as they say, a star was born.

In 1940, she starred in the Technicolor musical, Down Argentine Way, co-starring Don Ameche and Carmen Miranda. A box-office smash hit, this led to the public ravenous for the blonde girl with the million dollar legs. Her success and stardom were further cemented with Moon over Miami, a rare dramatic role in I Wake Up Screaming, and other comedies and musicals from the late 40s.

The 1940s were Grable's decade: her legs became the dream and ardent desire of many a U.S. serviceman during World War II. The famous shot-from-the-back publicity photo

of a swimsuit-clad Grable is still iconic, showcasing the classic elements of a pin-up girl. She once said, "There are two reasons why I'm in show business, and I am standing on two of them." She even had her legs insured for one million dollars in 1943 (that's $14,587,218.93 in today's money). This is why she is called "The Girl With the Million Dollar Legs." Interestingly, she also appeared in a film titled "Million Dollar Legs", only the titular legs weren't hers.

As the '50s rolled in, Grable's career began to fade as she aged. She did star in How to Marry a Millionaire, holding her own alongside Lauren Bacall and Marilyn Monroe. By the mid-'50s, however, she began to work more on stage and television as her film roles grew fewer and fewer.

Grable herself was a rather modest person when it came to her stardom, attributing most of her success to dumb luck. She was married twice, to former child star Jackie Coogan from 1937–39 and then to trumpeter and bandleader Harry James from 1943–65; she had two daughters with James. In the last few years of her life she shared a live-in relationship with Bob Remick, a dancer 27 years her junior who she met while performing in the touring company of Hello, Dolly!.