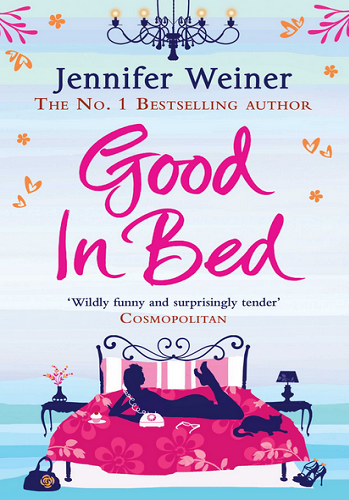 Candace "Cannie" Shapiro is a journalist at the Philadelphia Examiner, and her life seems fairly straightforward. She has a decent job, is fairly successful, and owns an adorable rat terrier named Nifkin. But, then again, there's that fact that her father walked out on her when she was younger, her mother coming out of the closet with a rather unpleasant girlfriend, and an incident with a certain guy she thought was the one. And one day, that certain guy, following a break, publishes an article entitled "Loving a Larger Woman"-which leads a (more) self-conscious Cannie to try rekindling their romance. Unfortunately for her, their next sexual encounter leaves her pregnant, which causes her a dilemma. But, from there, Cannie undergoes a journey that takes her from Philadelphia to Hollywood and back. Some things get better, some things get worse, but overall, Cannie begins to chart a new course for her life.
Advertisement:

Published in 2001, Good in Bed is the debut novel of Jennifer Weiner.

Good in Bed provides examples of: