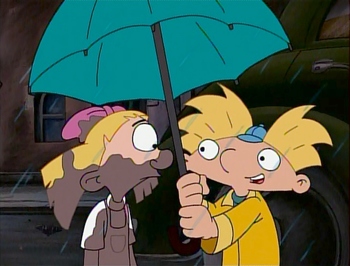 The reason why Helga fell in love with Arnold.
Eddie Valiant: Seriously, what do you see in that guy?
Jessica Rabbit: He makes me laugh.
— Who Framed Roger Rabbit
Advertisement:

The heroine, like the hero, tends to be much more mature and likable than in All Girls Want Bad Boys; frequently, they've been burned by a previous lover, and generally, they've matured. But it is not necessary. Any heroine who finds the hero attractive exactly for his more admirable qualities falls under Single Woman Seeks Good Man. This can range from liking his sense of humor, to appreciating his poetry skills, all the way to his Heroic Sacrifice. Rescue Romance is often a form of this. The Nice Guy, the Sheltered Aristocrat, the Knight in Shining Armor, the Nice Jewish Boy, the male Shrinking Violet, The Dutiful Son, the Keet, or the male Pollyanna wins the heroine's heart. Immature and hormonal souls may wonder What Does She See in Him?, but the heroine is much more likely to end up happy this way.

However, it creates a problem insofar as the heroine has to neither fight her common sense nor reform the hero for a Happy Ending. As a consequence, the writer needs some other method of generating conflict. This can range from a Star-Crossed Lovers plot to Twice Shy or fall into the background/coexist with an alternate source of conflict. See the Analysis page for details.

Frequently the victorious childhood friend or a Second Love. Compare to Understanding Boyfriend. Though seemingly rare, some people out there will be glad to know that, yes, this can be Truth in Television.

Note that this isn't Always Female as Single Man Seeks Good Woman can certainly be in play. Nor is this always heterosexual for that matter.

Of course, Tropes Are Tools. It has been overused and exaggerated in the Harem Genre, where the protagonist somehow attracts girls he has little to no interaction with merely because of simple decency, implying that people can win affection and do anything they want to a bunch of girls just by behaving like a normal nice person.

As this trope frequently deals with critical plot details, be warned: HERE THERE BE SPOILERS. Some are unmarked, too, so don't say we didn't warn you. Compare Samaritan Relationship Starter.