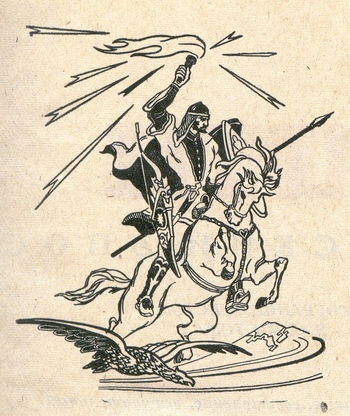 If our lives be short,
Let our fame be great!
Advertisement:

The Nart Sagas are the collective name for the mythological tales of the North Caucasus, representing the traditions of the Circassian, Abazin, Abkhaz, Balkar, Ossetian, Chechen and Ingush peoples, as well as that of the Kartvelian Svans and Georgian highlanders.

The tales concern the deeds of the eponymous Narts, a tribe of heroes set on performing great feats. They are not only characterized by their courage and strength, but also by their virtues and goodness, and love carousing and merriment as much as battle and glory. Among the most prominent of their numbers include:

Although they share core commonalities and Iranic influences, the epos vary between and within traditions. The Circassian and Abkhaz stories, for instance, retain more archaic elements reflective of ancient customs and beliefs. The elaborate Ossetian sagas uniquely divide the Narts into three separate tribes hostile to one another, each characterized by either bravery, wealth, or wisdom. Yet perhaps the most drastic difference is found in the Vainakh (Chechen-Ingush) tradition. Whereas the Narts are generally portrayed as heroic and good-hearted Boisterous Bruisers, the Vainakh Narts are typically bloodthirsty marauders in conflict with humanity. Naturally, these tales focus on the struggle of human heroes against more powerful enemies.

The Nart Sagas provide examples of: