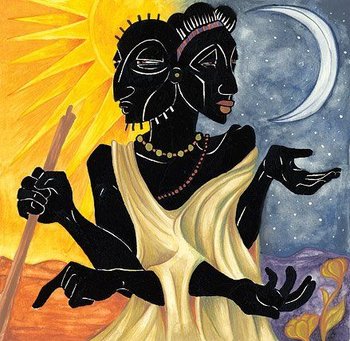 The traditional beliefs and practices of African people like their history remains largely unfamiliar and unknown to the European and American public compared to more popular worldwide mythologies like the Greco-Roman, Norse, Celtic, Aztec and Mayan pantheons. This page deals with all tribes and cultures originating from Africa, except for the Ancient Egyptians. We should mention that like with the Native Americans, this page encompasses a huge array of different people grouped here together for the sake of convenience. Worth knowing is that a large portion of these stories are oral tradition that haven't survived to the present day or have been "rewritten" with the introduction of the modern Abrahamic religions.

Of course being the second largest continent on earth with over 10,000 different ethnic groups it is an exercise in futility to treat "African mythology" as a monolith. However it is possible to loosely sort the lores of Africa into a few broad categories based on wider geo-cultural patterns and tropes.

Located west of Egypt, the Maghreb remains something of a terra incognita for western readers in the area of folklore despite extensive integration with the larger Middle-Eastern (and to a much lesser extent southern European) world. The aboriginal North African peoples known as the Amazigh (Berbers) sat at a crossroads of influences. Arabs and Turks from the east, Greek and Romance cultures to the north, and Sahelian cultures from the south. In the Neolithic era peoples ancestral to the Amazigh lived in the Green Sahara back when it was still a lush savanna. These people were among the earliest cattle herders and their rock art can still be seen today. The higher social status and freedom Amazigh women traditionally enjoy over their Arab counterparts draws attention to the old religion in which goddesses played a far larger role. Heroic queens such as the Tuareg Tin Hinan and Dihya of the Zenata (called by Arabs Al-Kahina) are still fondly remembered. The Amazigh worldview was largely centered on the agricultural village, seen as a microcosm of the universe. In more recent times the Amazigh mosque represents the foundation and centerpiece of the village in contrast to the Arab Bedouins who saw the mosque more as a spiritual oasis symbolizing the global nature of Islam. The ancient Amazigh cult of Bull-gods like Itherther and Ram gods would feed into Egyptian Mythology in the form of deities such as Amun and vice versa (Gurzil for example was considered the son of Amun).

The Sahel is a band of semi-arid grassland stretching from modern Senegal in the west to Sudan in the east.The story of the world in the western portion comprised the great cosmogenic myths where godlike ancestors walked the earth, the symbolic myths explaining the hidden nature of reality, and the historical myths concerning the origin of great dynasties. Common beliefs included the idea of a great water goddess being the source of life and death. This idea most likely found its origin in that fact that unborn children come from sacks of water, the relationship of blood with metal betraying a semblance between the river with metals, and that the agricultural peoples of the semi-arid region were absolutely dependent on not only the river but the life giving rains. When the water deity was not represented as a great mother it was visualized as a massive serpent. The widespread idea of caste systems reflected the notion of special groups of people who have unlocked mysteries of nature. Such as the blacksmith turning cold iron into valuable tools with the power of flame, or griots using the power of words to affect the world around them.

The historical legends of the Sahel approach something resembling the Chivalric Romance genre. Frequently they concerned the deeds of noble warrior heroes on horseback who lived by a strict code of conduct battling foes. Many foundational legends are patterned as Rightful King Returns. Other times they surrounded the adventures of bold hunters and/or fishermen belonging to organized fraternities who journey into the perilous wilderness. Such heroes often slay paranormal animals and escape the wiles of shapeshifting temptresses. Professional bard castes are the main custodians of traditional lore.

The legends of the rainforests in Guinea and Congo are much more fantastical and hyperbolic than those probably found anywhere else on the continent. The role of the ancestors is one befitting the gods of Eurasia. Early man shapes the universe while the non-human divinities mostly take a backseat. A common archetype is that of the man who reincarnates as his own son to avenge his killing. Or just as often a boy is born locked into a struggle with his father who despises him. Owning to the material conditions of slash-and-burn horticulture which encouraged polygyny, the relationship between brother-sister and uncle/aunt-nephew/niece was far stronger. As such Brother–Sister Team is a widespread trope in the mythologies of this area. With brothers often having to protect their sisters and sisters frequently offering Supernatural Aid to their brothers. Heroes in this area are often born with magic talismans which save them from dire situations.

The peoples of Lower Guinea frequently had elaborate pantheons of gods reflecting the complex nature of their societies as seen in Yoruba, Edo, Akan, and Gbe cultures. Interestingly enough, heroic epic songs were almost unheard of in their particular sub-region.

The Horn of Africa

Little survives of the pre-Abrahamic myths and legends of the Horn of Africa. However, rich new mythologies have been born out of it such as the elaborate Kebra Nagast which displays the legendary origins of the Ethiopian kings. The Zar spirit cult grew out of the beliefs of many peoples throughout the Horn, spreading as far as Egypt, Israel, and Iran.

In the Great Lakes region praise singers and bards would sing legends, particularly among the Haya people. In the feudal kingdoms of the region more serious and grounded tales of loyalty and honor were popular with the cattle-herding aristocracy. In contrast the legends of the peasants were much more relaxed, even poking fun at the nobles through thinly veiled myths. South of the African Great Lakes region where the mythology of the Chwezi dominated, the Migawo cult was very popular among the southern Nyamwezi and related peoples. On the coast Islam blended with native Bantu beliefs to create the cult of the Shetanni spirits. Monotheism and henotheism were common among the Nilotic speakers of eastern Africa.

In the savanna belt south of the Congo rainforest, myths typically concerned themselves with legitimizing the current dynasty and explaining why the previous rulers were either illegitimate or handed over legitimacy to the current rulers. A common legendary origin began to spread among the Luba-Lunda and associated peoples.

Occupied by the Khoikhoi, !San, Southwestern, and Southern Bantu the mythologies of this region were relatively divergent. The peoples of what is now Zimbabwe often believed in kings who had powers over fertility. The Sotho-Tswana, Herero, Ovambo, and Nguni tell many stories of ogre-slaying braves. And the Khoisan frequently had belief in an animistic universe absolutely teeming with spirits.

Both the Canary Islands and Madagascar had indigenous peoples with rich mythology and folklore. Due to cultural influences from elsewhere (Madagascar was colonised by Southeast Asians and the Canary Islands by Berbers) they stand apart when compared to mythologies from other parts of Africa.

The Hollywood History versions of this are Darkest Africa and Ancient Africa.