Web Video / The Town Of Nowhere

"I can't believe you vibe checked him with a bible."
—RevScarecrow, lamenting Twitch Chat's penchant for violence. 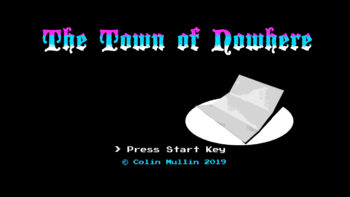 The Town of Nowhere is a subseries of Vinesauce and an Actual Play of a rather unorthodox form of Tabletop RPG gameplay created by RevScarecrow. Using various self-photoshopped assets made to mimic CGA graphics, Rev acts as a Game Master for his Twitch chat's sole Player Character, whose main goal is to find a sister not even they can remember in a West Texas town where monsters and other magical beings live in relative normalcy. Because any chat member can submit what they want said character to say or do to a majority vote, however, things tend to go Off the Rails in unprecedented ways.

. Rev later released condensed versions of the streams which remove the long pauses necessary for chat to make decisions on how to proceed. A playlist of the condensed videos can be found here