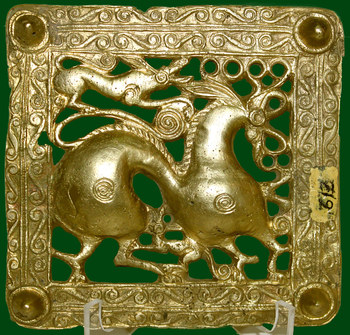 The Scythians were a nomadic Iranian-speaking people indigenous to Eastern Europe and Central Asia. Constantly at war with the more well known civilisations of Ancient Greece (and later the Roman Empire) to the west and the Persians to the south, these people are characterised typically as barbarians. True to form, they did make cups out of their enemies' skulls and shot arrows covered in poison and horseshit and went about pillaging and raiding, but they were also a very complex and artistic culture, commissioning exquisitely beautiful gold artifacts and burying their dead in magnificent monuments known as kurgans. Some kurgans even show women skeletons dressed in armour and with battle scars, indicating the egalitarian nature of Scythian society.

So, what did these fine people worship?

Well, we do know from Greek and Persian sources. Not terribly unbiased but in Herodotos' case he did try to paint them as a complex culture with royalty and client states and even castles. The gods of the Scythians were probably very similar to those of the Hindus and Zoroastrians due to their shared Proto-Indo-Iranian origin, albeit very different to modern practitioners of these religions. For example, the Top God was Tabiti, a female fire goddess; most top gods in both religions are male, though Hindus still have women tend to the fire and Zoroastrians envision their prophet as being birthed from flames.

The Pantheon offered by Herodotos was:

Though this strange and poorly understood religion did not survive the invasion of the Huns and conversions to Christianity (though conversely the Scythian-descended Alans seem to have brought "Ares" worship as far west as the Iberian Peninsula), the Ossetians have recorded the Nart Sagas, which may offer echoes of the ancient Scythian mythology.

Note: when researching Scythian religion, be VERY careful due to nazis and Turkic nationalists alike having tried to claim the Scythians as their own. Fairly neutral sources include this

. And of course, don't forget to read their chapter on The Histories.