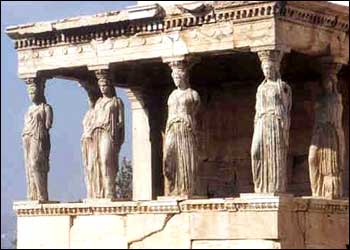 The Caryatid porch of the Erechtheion on the Acropolis in Athens, Greece
"In short, I say that as a city we are the school of Hellas; while I doubt if the world can produce a man, who where he has only himself to depend upon, is equal to so many emergencies, and graced by so happy a versatility as the Athenian."
— Pericles, Funeral Oration
Advertisement:

Think of Crystal Spires and Togas, but without the crystal spires or the togas.

Home of columned temples, chiton-wearing gods, slinkily dressed goddesses, amazons, and bearded philosophers. Also home to mythic thong-wearingnote That's referring to thong sandals by the way, not the ones you were probably thinking of. heroes who ride winged horses and do great deeds (all without getting either chafed or sunburnt). The Spartans live here too, and they're known for their brutal training methods, stylish slow-motion fighting techniques and for being manly enough to charge nearly naked into battle even when outnumbered 70 to 1. And they definitely aren't gay. Frequently confused with Ancient Rome by directors who just don't care.

In fact, this picture is a blend of two distinct periods; mythical/Bronze Age Mycenaean Greece, conventionally said to end with The Trojan War and the wider Bronze Age collapse

at around 1200BC, and classical/ancient Greece which started around the 8th century BC and lasted until the Roman conquest.note The period between the two are known as the Greek Dark Ages

of which little is known because the Bronze Age collapse hit so hard Greece basically stopped writing down things The "classical Greece" period itself tends to blend cultures that evolved and combined over the course of many centuries. While Athens at one time pulled the city-states together for defense against Persia, and both Sparta and Athens were heads of large military unions at one time or another, Greece never had a monolithic culture any more than the NATO bloc or Europe; it was the sum of the cultures of many independent city-states, each with its own culture, religion and calendar, all ultimately blended together in the giant food processor of history. If you were to visit the Balkan Peninsula in, say, Pythagoras' day, you'd find that religious practices and social mores varied heavily depending on what city you were in. Nonetheless, it's been suggested that the Ancient Greeks in general did see themselves as such, in a manner not too dissimilar to what's now called nationalism.

The ancient Greeks were also great colonizers, founding cities across the Mediterranean from what is now Spain to the Black Sea. In fact after the 4th century BC the largest Greek-speaking cities were generally outside the territory of modern Greece, though only Alexandria in Egypt shows up much in popular fiction (popular science may bring up Syracuse, mainly due to Archimedes living there). The classic Greek City State era ended with the conquests of Alexander the Great followed by Macedonian Succession Wars, by which time Greek actually spread across the Balkans and across the Middle East, all the way to Bactria (Afghanistan) and India. The Mauryan Emperor Ashoka left behind pillars with inscriptions in Greek alongside Pali and other Indian languages, and Greek sculpture inspired Buddhist sculpture in India. Eventually, these colonies became conquered by The Roman Republic where Hellenistic civilization nonetheless continued on unperturbed under the patronage of Romans who rather liked Greek culture. Indeed by the time the Western Roman Empire fell, The Remnant of a truly Greco-Roman culture became Eastern Roman Empire.

Ancient Greece has suffered more than usual cliche-making tendencies because it was unfortunately cast as the embodiment of Enlightenment in the Romanticism Versus Enlightenment contrast (with The Middle Ages suffering the opposite fate as its foil). Additionally, most fictional depictions of Ancient Greece will usually focus on the Trojan War (especially with Achilles), the Greco-Persian Wars (particularly the Battle of Thermopylae and the 300 Spartans) or the rise of Alexander the Great and the Macedonian Empire. Occasionally, The Peloponnesian War will be covered in other works but not as much as the Trojan and Greco-Persian conflicts. Mycenaean civilization despite its overall importance to Greek history is not covered that much in many works other than the Trojan War (which is set approximately around this time period) and the Minoans are even less well represented in modern media portrayals of Ancient Greek culture.

Ancient Greece, alongside Ancient Rome, is one of the two primary cultures from which Classical Mythology originates.

Compare Ancient Egypt, another historically prominent ancient civilization with a rich culture and mythology that lasted for millennia until the Roman conquest in 30 BC.

Popular tropes that feature or came around in this time period are:

Series set in this time period are: