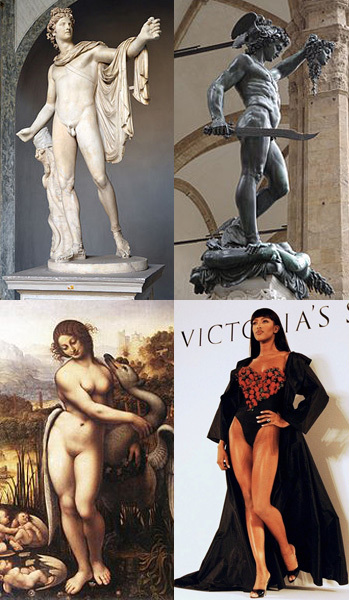 Four Classic Instancesnote The Apollo Belvedere, Bellini's Perseus with the Head of Medusa, Leonardo da Vinci's Leda and the Swan, and Naomi Campbell
Contrapposto (Italian for "counterpoise") is the term in the Western artistic tradition for a pose in which a person stands upright with most of their weight on one foot, so that their body is turned slightly to one side, with one shoulder a little higher than the other. This creates a relaxed but dynamic effect; the figure isn't standing at attention, but appears either to be in motion or to be capable of moving off at any moment. Nonetheless, someone in this pose "stands tall", and can be depicted meeting the viewer's gaze boldly or surveying their surroundings heroically. On a female figure, it also creates the visual effect of a reduced waist-to-hip ratio; at least one scientific study

has shown that this makes many people perceive the woman as more attractive.
Advertisement:

One weakness of the pose from the engineering point of view is that by definition it creates an uneven distribution of weight, placing the statue in danger of collapse. Expect to see the weight-bearing leg on classical examples propped up with strategically-placed carvings of rocks, columns, or small tree trunks (this can be seen on Michelangelo's statue of David). Modern examples may be made of different materials or supported by internal reinforcement, making this addition unnecessary.

Contrapposto may be the oldest of the Stock Poses; it was identified in Ancient Greece (making it Older Than Feudalism), where it was used in many classical statues, and rediscovered in The Renaissance, when it was used in both sculpture and painting. Hence, it often shows up in parodies of and call-outs to classic works, as well as still being used in art to this day. It's more subtle than other poses, but historically very important, as its development marks the point when Greek sculptors discovered that they could convey movement and complex emotion in a statue.

This pose is generally more subtle than the Boobs-and-Butt Pose, and in any case the figure is usually intended to be viewed primarily from the front rather than the rear, but either pose could evolve into the other easily enough when the person starts moving. It can be combined with the Head-and-Hip Pose, but putting the two together emphasizes both the bust and the hips, and may look like someone trying to be sexy to the point of parody and beyond. It is sometimes used as a Modeling Pose, either to show off an elegant skirt or well-cut pair of pants, or just to associate the clothes with someone who looks relaxed but dynamic, and thus cool. A Sexy Walk uses much of the same effect, but more blatantly and in motion rather than as a fixed pose; in fact, the walk may end with this pose, as when a model at a Fashion Show, on reaching the end of the catwalk,

◊ pauses, juts her hip, and glances sideways at the audience.

Related to other Stock Poses such as the Captain Morgan Pose (another dynamic asymmetric stance) or Foot Popping (which also suggests energy by putting the figure’s weight onto one foot).