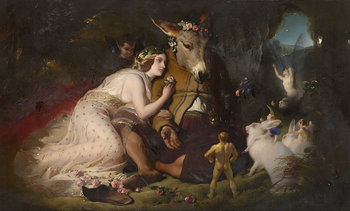 "Titania and Bottom" by Edwin Landseer
"This is the silliest stuff that ever I heard."
— Hippolyta
Advertisement:

A comedy by William Shakespeare about a Love Dodecahedron that goes out of control thanks to the meddling of fairies with a Love Potion.

Two young Athenians, Hermia and Lysander, are in love. Alas, Hermia's wealthy father Egeus has just promised her to another man named Demetrius, who was formerly with a girl named Helena — who just happens to be Hermia's best friend. The lovers go to court, where Duke Theseus (who has his own impending marriage on his mind), rules in favor of Egeus. He gives Hermia the choice to accept the marriage, be executed, or become a nun.

So Hermia and Lysander slip away by night. Before they leave, they confide in Helena and ask her not to tell anyone; naturally, Helena tells Demetrius in hopes of getting back into his good graces. Demetrius follows the lovers, with Helena chasing after him, and all of them end up lost in the same forest.

Meanwhile, Oberon, King of the Fairies, is in a petty quarrel with his wife, whom he plans to prank with magical eyedrops that will make anyone fall in love with the next person they see. After eavesdropping on Helena and Demetrius and seeing how he mistreats her, Oberon is moved to pity and sends his servant Puck to give the potion to "a youth in Athenian garb," traveling in the woods with a woman, so that she will be the first thing he sees. Oberon then finds Titania asleep and applies the juice to her eyes.

Puck duly uses the potion on a young man in Athenian garb asleep in the woods near a young woman. Unfortunately, it was Lysander, not Demetrius, and the woman who wakes him is Helena. Hermia finds that her beau is now madly in love with her best friend. Unaware of his error, Puck proceeds to his part of the prank regarding Titania. He finds a none-too-bright actor in a group rehearsing a play to be performed at Theseus' wedding, turns his head into a donkey's, scares off the rest of the performers, and leaves him where Titania will see him.

Upon discovering that the wrong Athenian was hexed, Oberon tries to mend matters by giving the potion to the intended victim, Demetrius. This backfires too, and now both men have rejected Hermia and are close to blows over Helena, who thinks that the other three are mocking her. Meanwhile, Titania is in love with the guy with a donkey's head (though he doesn't seem too distressed), Oberon is frustrated at the failure of his plans, and it's going to take some serious Deus ex Machina to repair all this chaos.

Of course, it all gets straightened out in the end, everyone is paired off in a triple wedding, and the local tradesmen get to perform their hilariously awful play for the Duke and entourage.

This is the play that that kid killed himself over in Dead Poets Society. Also, that music which plays at the end of weddings? Felix Mendelssohn wrote it for an 1846 production of this play.

The play includes examples of:

The 2016 film by Russell T Davies adds examples of:

Other productions and adaptations add examples of: