Theatre / The Comedy of Errors 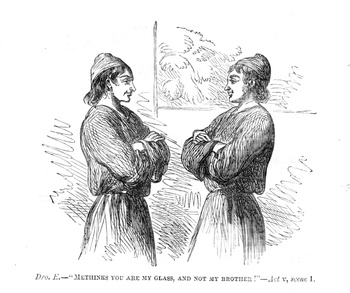 "We came into the world like brother and brother;
And now let's go hand in hand, not one before another."
— Dromio of Ephesus, V.i
Advertisement:

A comedy (of errors) by William Shakespeare, based on an even older play by Plautus. It chronicles the misadventures of two sets of long-lost identical twins, with the same name, as they get mistaken for one another. It's also one of the only Shakespearean plays that follow the Classical Unities— unity of time, unity of place, and unity of story. note  The Classical Unities were supposed "rules" for the theater that consisted of the following: Unity of Time meant the play must take place in no more than 24 hours. Unity of place meant that ideally the stage should represent one singular location, or at most the play should be limited to the same general location, such as the same city. Unity of story meant that everything in the play should follow one main action, with few or no subplots. It's also his shortest play.

Aegon, a merchant from Syracuse, has just been arrested by the Duke of Ephesus and is set to be executed unless he pays the Duke a sizable fine. Hoping for mercy, Aegon tells the Duke about his life before his arrest: He was married to a woman named Emilia, and together had twin boys. The new parents acquired a set of poor twins to serve as valets for when their children became adults (this was Shakespeare's own idea, not found in Plautus' Menaechmi), but soon after the family was separated by a shipwreck. Aegon survived, with his Antipholus and the valet Dromio. Years later, Antipholus and Dromio left Syracuse to find their long-lost brothers, and when they didn't return, Aegon set off to find them himself, only to get arrested in Ephesus. The Duke is touched by the story, and grants Aegon a one-day extension on the fine (and execution).

Meanwhile, Antipholus and Dromio of Syracuse (this'll become important later) finally arrive in Ephesus. Antipholus sends his servant off to pay for a hotel, and then things get confusing. See, Antipholus and Dromio's brothers are alive and well and living in Ephesus, and, in fact, they have the same names as their brothers. Emilia, apparently, wanted to name them after their siblings. The obvious occurs: Dromio of Ephesus wanders on stage, and when Antipholus of Syracuse asks if he's secured the inn, he has no idea what he's talking about. Believing Dromio of Ephesus is teasing him, Antipholus of Syracuse beats him. The confusion continues with Antipholus of Ephesus and Dromio of Syracuse, and the Ephesians' various lovers. Repeat for two-to-three hours, adding bawdy jokes, accusations of infidelity, and money-transfers when appropriate. Everything ends happily, with the brothers, parents, and lovers all reunited.

Incidentally, a "comedy of errors", lower-case letters, is a humorous play that involves mistaken identity and has a happy ending. This delivers in spades.

While not as popular as Shakespeare's A-list, Comedy of Errors is still performed today. It was adapted into a Rodgers and Hart musical, The Boys from Syracuse, and into a 1988 movie, Big Business, starring Lily Tomlin and Bette Midler (as the gender-flipped pairs of twins). There is also a famous but (until YouTube) hard-to-find 1987 production by the juggling troupe The Flying Karamozov Brothers, which begins with the famous line... "In Syracuse, you dress in a tie. In Ephesus, you JUGGLE OR DIE!"