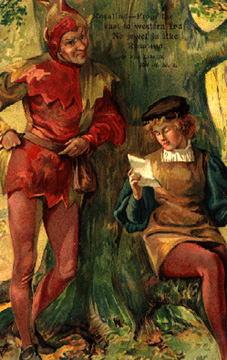 All the world's a stage,
And all the men and women merely players.
They have their exits and their entrances;
And one man in his time plays many parts
His acts being seven ages...
— Jaques, 2.7
Advertisement:

A comedy by William Shakespeare. Like many of his lighter plays, this one focuses on young love, comic misunderstandings, and good ol' fashioned cross-dressing.

Duke Senior has been usurped by his brother, Frederick. He flees to a paradise-like forest called "The Forest of Arden," along with some servants and friends. His daughter, Rosalind, stays behind; she is the best friend of Frederick's daughter, Celia, and so he tolerates her— for a while. Orlando, a young nobleman, sees Rosalind and instantly falls in love, but his older brother, Oliver, casts him out of his home. He, too, flees to the forest.

Eventually, Frederick becomes agitated with Rosalind after she falls in love with Orlando, who is the son of one of Frederick's enemies. He banishes Rosalind, who flees to the woods with Celia and the court clown, Touchstone. To protect themselves, they don disguises— Celia dresses as a woman called Aliena, and Rosalind pretends to be a man named Ganymede. They meet up with the servants of the true Duke (including a very depressed and depressing man called Jaques), who takes them in.

The majority of the plot is spent on the romances. Orlando, still in love with Rosalind, hangs love notes for her on the trees in the woods. Rosalind, equally in love with Orlando but still disguised as a man, encourages him to pursue her. Phoebe, a shepherdess, falls in love with Ganymede, and she in turn is loved by Silvius, a shepherd. Even Touchstone the Clown has a woman he's pursuing.

Eventually, due to a mixture of cunning plots and Deus ex Machina, the tangled love triangles are sorted out and Oliver and Frederick mend their ways, returning power to their brothers. The play ends with four marriages, and everyone returns happily to the duchy— except melancholy Jaques, who joins a monastery.

The plot is closely based on the novel Rosalynde; or, Euphues' Golden Legacy by Thomas Lodge, published 1590.

The play has been adapted on film by Sir Laurence Olivier in 1936 (it was his first Shakespeare film adaptation) and another film was made in 2006 by Kenneth Branagh, which reset the play among British expatriates in Meiji Japan.