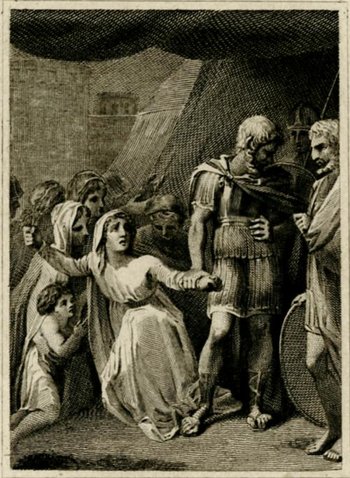 "This Martius has grown from man to dragon: he has wings — he's more than a creeping thing."
— Menenius
Advertisement:

Coriolanus is a play by William Shakespeare. It is one of his plays set in Ancient Grome (alongside Titus Andronicus, Julius Caesar, and Antony and Cleopatra) and is considered to be Shakespeare's "last tragedy" before he turned to his final phase of serious romance problem plays. The play is an adaptation of the "Life of Coriolanus" from Plutarch's Parallel Lives and is set in the early Roman Republic.

Caius Martius is a Roman general, who is an excellent soldier, brave commander, and brilliant on the battlefield but incorrigibly conservative, arrogant, and openly contemptuous of the ordinary folk. He is so unpopular personally that when we meet him at the start of the play, there are food riots going on in Rome and Caius Martius is being blamed for taking the grain supplies for the army. While others try and calm the situation, Martius simply retorts that the commoners aren't worthy of having the grain as they have not done military service. After defeating the army of the Volsces tribe and capturing the city of Corioles, Martius is given the name "Coriolanus" as a reward, and is persuaded to run for Consul. However, two of his opponents conspire to whip up the commons against him and he is hounded out of Rome for sedition when he calumnies against the power of the tribune of the plebs, at which point he gives a bitter speech about the evils of democracy and the ingratitude of the rabble. Caius Martius, now hungry for revenge against his homeland, offers his services to the Volsces and their leader Tullus Aufidius. Marching on Rome, he has the city at his mercy, but is persuaded by his wife and mother to spare the city. When he returns to Aufidius, he is murdered for his betrayal.

It has the reputation of being the only Shakespeare play banned by a modern democracy — specifically France in the 1930s, because it was being co-opted by fascist groups. It was also briefly banned in West Germany but was the subject of a notable production and adaptation in East Germany under Bertolt Brecht's Berliner Ensemble).