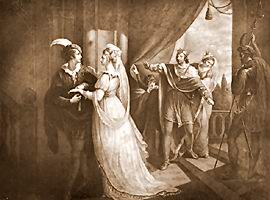 Cymbeline, a tragicomedy by William Shakespeare, is one of the Bard's more obscure plays. Borrowed, barely, from Celtic lore and from a story from The Decameron, it tells the story of a king who rebels against Rome because of his evil wife. For unrelated reasons, his daughter spends most of the play cross-dressing and looking for her banished husband. Actually, it's more about the latter than the former.
Advertisement:

Cymbeline is king of a city in Britain, during the time of The Roman Empire. His daughter, Imogen, is in love with Posthumus, a poor nobleman. They marry, which infuriates Cymbeline, and so he banishes Posthumus to Italy. In Italy, Posthumus meets Jachimo (or Iachimo), who makes a bet. He says he can seduce Imogen, and prove that all women are naturally unfaithful. Jachimo goes to Britain, but failing to seduce Imogen by traditional means, resorts to trickery. Hiding himself in a chest in her room, he watches her sleep and collects details from her room. He also steals a bracelet, which was a gift from Posthumus.

Jachimo returns to Italy, hands Posthumus the bracelet, and provides details on Imogen's room and her naked body. Posthumus sends word to his servant Pisanio in Britian to kill his wife for her infidelity. Pisanio does not believe Imogen has cheated, so he convinces her to disguise herself as a boy and find her husband, so she can tell him her side of the story; Pisanio, meanwhile, will tell Posthumus she's dead. Imogen goes off to find her husband, but gets lost in Wales; she meets an exiled nobleman and his two sons. Unbeknownst to them but knownst to the nobleman, they are actually Cymbeline's sons (and Imogen's brothers); the nobleman kidnapped them in revenge for being exiled.

We learn that Cymbeline's Queen has convinced him to stop paying tribute to Rome, so Rome is about to attack. Due to circumstancesnote The Queen, who is evil, gives Imogen a potion that Imogen believes is medicine but the Queen knew was a deadly poison except it turns out that the doctor who the Queen asked for poison didn't trust her and just gave her a sleeping potion; while she's sleeping, Imogen's brothers behead the Queen's son Cloten, who has the hots for Imogen and was out looking for her, and when she wakes up she thinks he's Posthumus since his head's gone and he's dressed in Posthumus's clothes. Whew!, Imogen believes Posthumus is dead, and Posthumus regrets murdering her; she mourns, and he tries to kill himself by first fighting for Britain against Rome, then switching into Roman garb when the Britons win. Jupiter, the god, shows up to say he'll protect Posthumus. The next day, Posthumus is brought out as a prisoner, and one by one the cast shows up to explain the plot. Everyone lives happily ever after, except the Queen, who dies; with her dead, Cymbeline decides to start paying tribute to Rome again.

Basically, the play is a mishmash of plots Shakespeare regularly used in other plays. One interesting aspect of it, though, is that the characters can be read as allusions to Jacobean figures. James of England is Cymbeline, who wishes for unity and peace. The play also emphasizes the concept of "Britain" — the word appears more in this play than any other Shakespeare play, while the word "England" appears not a once, averting the common anachronism of making reference to England before its existence.

In March 2015, a film adaptation was released, directed by Michael Almereyda (who previously directed the 2000 film adaptation of Hamlet). Ed Harris played the title role, with Milla Jovovich, Ethan Hawke, Penn Badgely, Anton Yelchin, Dakota Johnson, and John Leguizamo in supporting roles. The film is a Setting Update, portraying Cymbeline as the leader of a modern-day biker gang at odds with a corrupt police force.