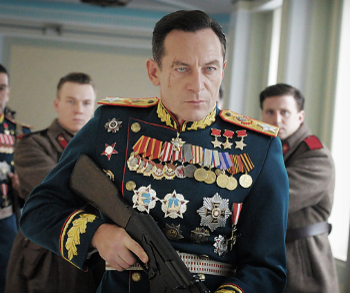 "I fucked Germany. I think I can take a fleshlump in a fucking waistcoat."
Soldier: Where ya goin', General?
Patton: Berlin. I'm going to personally shoot that paper-hangin' sonofabitch!
— Patton
Advertisement:

The Four-Star Badass is a badass in a military hierarchy who also happens to be a flag officer.

The Colonel Badass page explains that a Colonel is usually more badass than a General because although a General has the higher rank (and may even be a certifiable badass himself) they're usually relegated to desk duty and administrative tasks. This is also the reason why The Captain will always be the star of the show even if they don't have the same clout as a Commodore or Admiral.

However, some fiction writers don't subscribe to this notion. They believe that in order to have reached a four-star rank you had to have done some serious asskicking once upon a time. While some writers feel Badassery is a muscle that grows weak with disuse, the writers who subscribe to this trope feel it's more like riding a bike; you never forget how to do it. Even after years of sitting behind a desk, filing reports, cashing fat checks, and being saluted by everybody.

The important characteristic of Four-Star Badass is the BADASS. It's not enough for them to be The Brigadier or a Benevolent Boss (although they tend to share some of the same characteristics, like never saying "We Have Reserves" and being A Father To Their Men). They have to actually do something to earn the title. This usually involves rolling up their sleeves, ditching the desk (heh), and mixing it up.

This is a man who will fight alongside his men while co-ordinating the campaign, and is not afraid of getting his own hands dirty in general terms. They will often have been non-commissioned officers for quite some time before being made a General, and as a result of that, fieldwork comes naturally and is more instinctive for them than others. As one on one fighters, they will generally also be superb, with an unusually strong, generalised knowledge of tactics.

This happens in a number of ways:

Many examples of this trope will probably turn out to be Frontline Generals, and sometimes Cool Old Guys and Cool Old Ladies. Often a contemporary of the Old Soldier.

While the Four-star thing is in the title, this applies to any character holding any level of General or Admiral rank, including Commodores.

Contrast General Rippernote Though sometimes this guy may be badass enough to qualify, especially if his obsession came from leading the fight from the front and snapped after seeing the Enemy's atrocities firsthand. and General Failure. May have a Chest of Medals.

No Real Life Examples, Please! With thousands of years of recorded history, there are enough of them to crash the entire wiki. Given the fact that being Badass is a requirement, every general in history, excepting those in militaries where money or family connections are considered more important than ability, is an example.