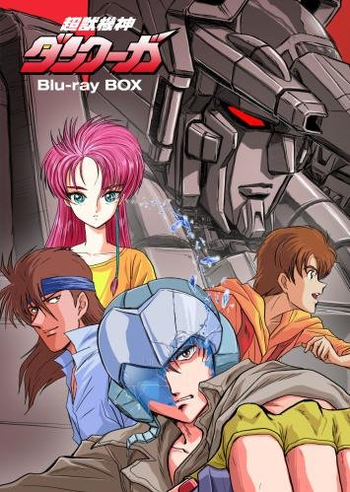 Dancougar is a 1985 Super Robot anime by Ashi Productions which tells the story of the Cyber Beast Force (Juusenkitai). The Earth is under attack by the Muge Empire, and they slowly take over the Earth as they were able to acquire information about Earth's resources and strategies thanks to a traitor named Shapiro Keats. The last line of defense for the Earth is the Cyber Beast Force, a squad of soldiers operating machines programmed with the instincts of wild animals, and who are able to unleash the full potential of that bestial rage. The Juusenkitai pilots are:

Eventually, as the story advances, their machines are able to combine into one giant robot known as Dancougar. Together, they must defeat the Muge Empire and liberate Earth.

Notable for having strong Real Robot elements, despite ostensibly being a Super Robot show - it's either a Super show with Real tendencies, or vice-versa. Unusually for a mecha show, the main voice cast also got the chance to sing a few songs.

The TV series was followed by an OVA finale in the form of "Requiem for the Victims", then two further OVAs - the one-shot "God Bless Dancougar", and the four-episode "Blazing Epilogue".

This series also got a sort-of sequel/Spiritual Successor in the form of Dancougar Nova, though a common complaint is that it's "Gravion Drei". There was also a manga called Dancougar BURN from 1997-8, which borrowed some of the same elements but was more of a remake.

After decades of being relegated to out of print subtitled VHS tapes, the series was eventually licensed