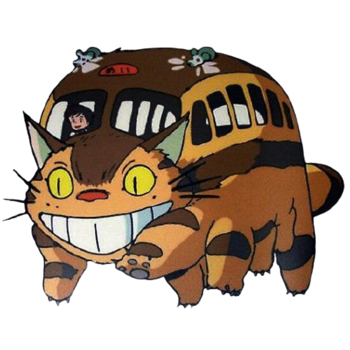 The Catbus: convenient for transport, and huggable to boot!
Advertisement:

A living creature who looks and acts like an animal (sentient or otherwise), except it has distinctive vehicle components, like windows and doors, or wheels, or luggage storage areas. It's best not to think about where its internal organs are.

Not to be confused with ordinary animals being used as vehicles, no matter how outlandish. See Mechanical Horse for animals made of mechanical parts, Automaton Horses for animals that might as well be made of mechanical parts, and My Horse Is a Motorbike for vehicles being used in roles traditionally allocated to animals. They may or may not be part of Organic Technology or a Robeast.