Anime / The Dagger of Kamui 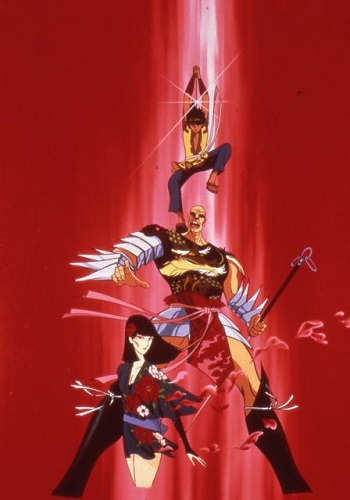 Jiro, Tenkai and Oyuki (from top to bottom)
"In heaven and earth, you are all that I can rely on. Whether going along with you will bring about misfortune or hope, for now I do not know. But there is no going back now!"
— Jiro
Advertisement:

The Dagger of Kamui, sometimes referred to as Revenge of the Ninja Warrior, is a classic animated film released in 1985, one of the earliest works of Madhouse, and based on several novels of the same name.

Japan, 19th century, the end of the Edo period. An Ainu

foundling named Jiro is taken in by a widowed inn-keeper and her daughter. One evening, Jiro's adoptive family is assassinated by a ninja, and Jiro is framed for the murder with a strange dagger left at the scene. Jiro is forced to flee, with the dagger, in order to escape punishment for the crime. He eventually runs into a strange monk named Tenkai, who unexpectedly presents him with the opportunity to get revenge on the man who actually killed his family. Jiro, still a young and naive boy at the time, accepts the offer, and soon takes the opportunity to stab the man Tenkai's followers captured.

From then on, Jiro's fate is entirely tied to Tenkai's ninja faction, as he is raised and trained in the arts of ninjutsu. But Jiro's first mission, to discover the fate of his lost father and his missing birth family, is complicated when the monk sends his other ninja out to kill him. Jiro's journey takes him throughout feudal Japan — and beyond — following a series of clues that will eventually lead him to the truth. A truth that is inextricably tied to the strange dagger that has become Jiro's main weapon. But will that truth really appease his soul?

The series' animation is top-notch for an 80's animated film, just like its excellent soundtrack. Despite being quite obscure in the West, both the manga and the anime were very influential, namely Go Nagai among others cites it as a reference.