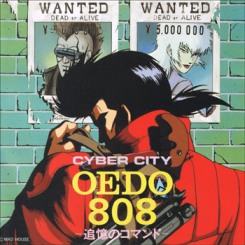 "You wouldn't recognize a goddamn vampire if one jumped up and bit you on the end of your fucking dick."
— Benten (dub)
Advertisement:

Cyber City Oedo 808: In the year 2808, convicts with Longer-Than-Life Sentence are imprisoned in penal satellites orbiting around the Earth. Some convicts with 'skills' considered profitable to the general public are offered jobs as special police officers known as the Cyber Police, allowing them to deduct some time off their sentences, as well as a small degree of freedom while they're working.

The catch: they have an explosive collar on their neck at all times, which will explode when:

Three such lucky men: Shunsuke Sengoku, the foulmouthed anti-hero; Merrill "Benten" Yanagawa, the effeminate razor-wire wielding assassin-type; and Gabimaru "Gogol" Rikiya, the imposing, gruff hacker with the cool visor, are put under the watch of Juzo Hasegawa, the warden. Hasegawa assigns these men to various incredibly dangerous cases throughout the dystopian city of Oedo (while never stated explicitly, it is assumed that this city is Tokyo in the distant future, given that Oedo is a variation of "Edo", the name of Tokyo until 1868).

Each criminal-turned-almost-unwilling-cop gets his own focus episode throughout the 3-episode OVA series, with plenty of trademark Yoshiaki Kawajiri action and character designs all over the place.