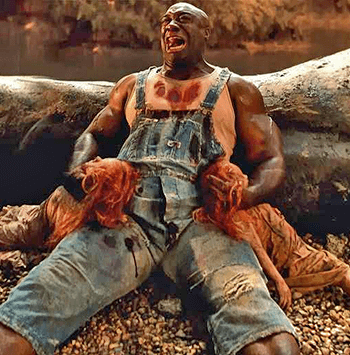 It's Not What It Looks Like
"Anyone else may be the murderer. The Grand Lama of Tibet, maybe, or the lady principal of a girls' seminary three thousand miles away. But not—trust the novelist!—not the man with the gun in his hand, who is leaning over the still quivering corpse."
— Edmund Pearson, Murders That Baffled the Experts
Advertisement:

Pretty much any Police Procedural will at some point note that the person who "finds" a body is usually a pretty good first suspect. However, this is simply a starting point for the investigation, and the evidence will usually lead to someone else - if it didn't, there wouldn't be much of a story.

In other genres, though, the first suspect is the prime suspect. End of.

Here's the scene: Our hero, usually someone Walking the Earth, arrives in the Adventure Town late at night when some intrigue is going on. Suddenly, he hears cries of alarm, and, being a hero, rushes off to see what's happened. He finds a hapless Red Shirt, recently killed by this week's murderer/monster/freakish otherworldly phenomenon. He stoops down to check the body and see if there's anything he can do to help.

Approximately two seconds later, the authorities arrive on the scene. Often, they will be led, unknown to everyone, by the Real Killer. Since the hero was found hunched over the body, he is instantly assumed to be the murderer, and it will be damned hard for him to convince anyone otherwise.

In Speculative Fiction, it will usually turn out that on this Planet of Hats, the local justice system is sufficiently ill-conceived that being found hunched over a dead body is considered absolute legal proof of guilt, unless the suspect can produce the actual killer himself.

In some instances, this can be justified as racism: in works taking place in a racist society, a nonwhite or foreign person will automatically be considered the murderer, because these people are corrupt, white/local/superior race people are obviously righteous and no person of that kind would murder someone.

This trope is often (and cheaply) accompanied by a sub-trope: "Don't pick up the knife!" The person standing over the corpse feels inexplicably compelled to pick up the bloody knife, smoking gun, or gory fireplace poker lying next to the victim. This makes it easier for the writer to justify the police ignoring all other evidence and possible suspects, but is counter-intuitive: what instinct or rationale could cause a normal human being to touch such a horrible object, let alone pick it up? With embedded knives, this is worse, as removing a knife from a stabbing victim can actually cause more harm by unplugging the wound.

A related scenario (which sometimes but doesn't have to involve murder) is Possession Presumes Guilt, where if someone has been burgled/mugged/kidnapped/the victim of vandalism/etc, whoever is first found with the victim's belongings (or pieces thereof) in their possession is assumed to be the culprit.

Also related is The Murder After, when the character wakes up in bed next to the victim's freshly murdered corpse.