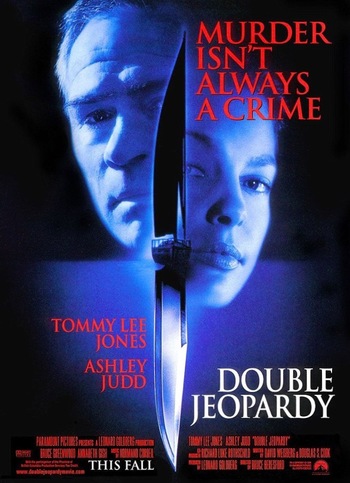 Elizabeth "Libby" Parsons (Judd) is seemingly Happily Married to Nick (Greenwood) and living an idyllic life with their son Matty. During a night out on their yacht, Libby awakens to find the cabin covered in blood and a knife on the deck. There is no sign of Nick. Since Libby cannot explain what happened to her husband and circumstantial evidence points to her guilt, she is convicted of murder.

Libby is sent to jail to begin her sentence and she entrusts a friend with taking care of Matty. While in prison she discovers that Nick is actually alive and well, and that he framed her for murder. A fellow inmate advises Libby that if he really is alive, she should wait until she is paroled and then kill him for real, and no court could convict her because of the legal concept of double jeopardy: as she has already been convicted of killing Nick, she cannot be tried twice for the same crime.

Six years later, Libby is paroled and placed under the supervision of parole officer Travis Lehman (Jones). Her friend is dead and Matty has disappeared. She soon absconds from parole and sets about trying to find Nick and Matty with Lehman in pursuit. Only now, two former spouses are out to kill each other. Lehman has to figure what is going on and make a stand of his own.

Not to be confused with the second round of the game show.