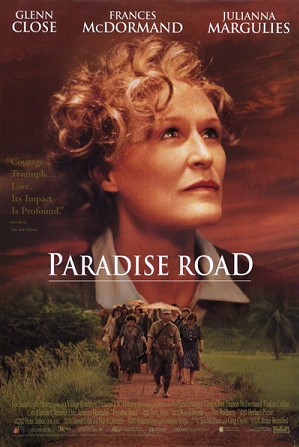 "It is our Paradise Road... How silent is this place."
Advertisement:

The film charts the journey of a group of women from Australia, the USA, the UK and the Netherlands as they are taken prisoner by the Japanese in World War 2. One of the women, Adrienne Pargiter (Close), decides to start a vocal orchestra to lift the spirits of the inmates, but the domineering Japanese guards want to put a stop to it.

Based on stories of women who survived internment in Japanese POW camps, Paradise Road is a story of hope, courage and survival. It is studied in Australian schools as an example of conflict, Australian history, and women's stories.

Tropes included in this film: