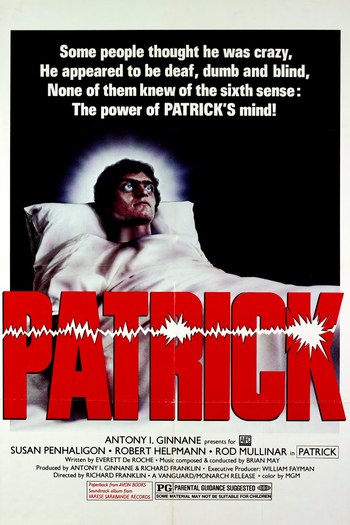 In a private hospital in Melbourne, a young man named Patrick lies in a vegetative state, having murdered his mother and her boyfriend three years earlier by electrocuting them in the bathtub. Unknown to the hospital staff, Patrick possesses powerful psychokinetic abilities which he can use to manipulate his surroundings in order to suit his needs. When he falls for nurse Kathy Jacquard (played by Susan Penhaligon), he uses his powers to wreak havoc on the men in her life and defend himself against the hospital's bitter matron, who plans to kill him.

Along with the original Mad Max, the film is often credited with popularizing Australian cinema overseas. An unauthorized In Name Only sequel titled Patrick Still Lives was released in 1980, while a remake was released in 2013.