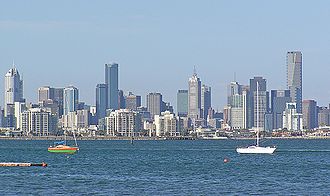 The Melbourne skyline.
"I'd give you all of Sydney Harbour, all that land and all that water, for that one sweet promenade."
—Paul Kelly, "From Saint Kilda to King's Cross"note in reference to the St.Kilda promenade, Melbourne's most famous beach
Advertisement:

Melbourne, the second-largest city in Australia, is the capital of the state of Victoria, and according to the Economist Intelligence Unit, the most livable city in the world. Its major landmarks include Federation Square (known for being ugly in the sight of many), the Eureka Tower, Flinders Street Station, and the MCGnote Melbourne Cricket Ground.

The city of Greater Melbourne holds 4.2 million residents; the area of the city stretching from Weribee in the west, to Gembrook in the east, and Tullamarine in the north. It covers over half the coastline of Port Phillip Bay.

Historically, Melbourne was founded relatively late for an Australian state capital (1835), by a man named John Batman, who wished to call it Batmania. It would soon overtake all the other cities in Australia after the gold rush of the 1850s, bringing great wealth and a swift population increase to the city. Between 1880 and 1900, Melbourne was not merely the largest city in Australia, but in the entire Southern Hemisphere. It was also, at that time, the second-largest city in the The British Empire, topped only by London itself. Shortly after Federation, it was overtaken by Sydney, which has remained the largest city (and the possessor of vastly more iconic landmarks) ever since.

It bills itself as the cultural capital of Australia, mainly for being the birthplace of Australian Film and Television, as well as having a diverse multicultural population, notably having the third-largest Greek-speaking population of any city, including in Greece. It is also the first Australia city to get many plays and has a thriving music and comedy culture.

(Australia's only other homegrown sport), and home to the largest capacity cricket stadium in the world, the MCGnote 100,000 people, although it plays host Australian Rules matches most of the time. The city also hosts the Australian Formula One Grand Prix - usually the season opener in the last couple years - in a temporary street circuit around Albert Park. As a result, sport dominates the Melbourne way of life. Go on, try to find a train with no Aussie Rules supporters in the winter.

A resident of Melbourne is called a Melbournian (also spelt Melburnian) or Melbournitenote This last one is almost never used in Melbourne itself. Melbourne tends to have a rivalry with Sydney and Adelaide in particular; the rivalry with Sydney over which city is better, and with Adelaide over who has the better football teams. Despite the spelling, it is pronounced 'mɛlbən' or 'Mel-bun' - 'Mel-born' is incorrect.

Melbourne also has the largest tram network in the world. Because of this, any shot of Melbourne in Australian media must have a tram in it. (The cop comedy Bad Eggs deliberately set out to avert this trope, and has some very oddly-framed Establishing Shots and quick cuts as a result — the things run on all but one major through street in the central city.) Similarly, Melbourne is often presented as cold and wet most of the time, due to its higher-than-average rainfall (compared with the rest of Australia). The weather is also highly variable in general and is known for completely changing in a very short period of time (from sun to rain and back again in the time it takes to walk to the shops, for example), leading to the phrase "If you don't like the weather in Melbourne, just wait 5 minutes." Due to this - and the perverse fondness of most Melbournians for their weather (often expressed as 'why would you want to live somewhere the weather's boring?') - most conversations had in Melbourne will include some form of talking about the weather.

The Yarra River is the city's main watercourse. Traditionally, the richer suburbs are on the south/east side of the Yarra, while the poorer ones are on the north/west side, creating a Snobs Versus Slobs divide. This is slowly changing as a result of gentrification, and the Snobs Versus Slobs is now often seen as lining up as Inner City Hipsters versus Outer Suburban Bogans ("Inner" is roughly defined as the area covered by the tram network not counting the two long lines).

Australian shows filmed/taped in Melbourne include:

Films set or shot in Melbourne include:

Musicians from Melbourne include:

Actors from Melbourne include: