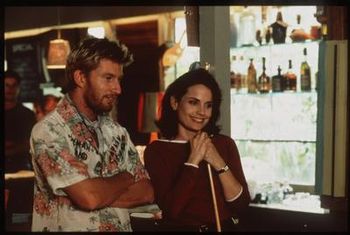 Diver Dan and Laura
Full fathom five thy father lies;
Of his bones are coral made;
Those are pearls that were his eyes:
Nothing of him that doth fade
But doth suffer a sea-change
Into something rich and strange.
Advertisement:

Sea Change is one of Australia's most iconic and critically acclaimed dramedy shows. Named after a line from William Shakespeare's The Tempest, the show is about transformation.

Sigrid Thornton (The Man from Snowy River) plays Laura Gibson, a competitive, neurotic and work-driven lawyer whose workaholic lifestyle has distanced her from her husband, Jack, and children Miranda and Rupert so much that the only thing they have in common anymore is that they live in the same house.

That is, until the day when her life collapsed.

It started when her alarm clock broke and she overslept. Which led to her jumping out of bed onto the cat. Which led to a $400+ vet visit. And that was before the day got bad.

By the end of the day, Rupert has been expelled from school, the partnership Laura was seeking at her law firm went to a younger, more people-friendly colleague, Jack has been arrested for real estate fraud, and Laura finds out he was having an affair... with her sister.

After a mental-breakdown of the home movies, pajamas and chocolate biscuit variety, Laura decides she is going to take the kids and start afresh in the last place where she can remember being happy: a small coastal town where they once went on holiday when the kids were little, Pearl Bay. Without hesitation she buys the holiday house in which they had stayed and takes the job as town magistrate.

Unfortunately, paradise isn't quite as Laura remembers. The old holiday house is dilapidated and in the middle of a caravan park, her first case is to pass judgment on the previous magistrate, who is also the extremely likeable town drunk, and the town seems to be firmly in the grip of one Bob Jelly (John Howard), who is the town mayor and real estate agent. That's not to mention the town politics and the snail-like pace of life.

Luckily (or maybe unluckily) for Laura, there is a colourful group of locals who are ready to help in their very own laconic and easygoing way. Their leader is the laid-back and enigmatic "Diver" Dan Della Bosca, played by David Wenham (The Lord of the Rings, 300) in his Australian Star-Making Role, who seems to have chemistry with Laura.

It originally aired from 1998 to 2000. Even though it only lasted three years, the show was supposedly responsible for a rise in the level of people moving from cities and suburban areas to lead a coastal life, and remains a much-loved classic. The show was revived in 2019 as a miniseries subtitled Paradise Reclaimed, with Sigrid Thornton, John Howard, Kerry Armstrong, Kevin Harrington and Georgina Naidu reprising their roles.