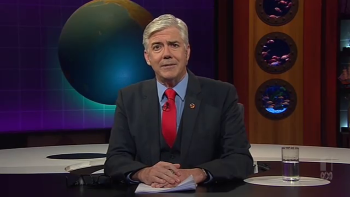 Yes, he's as bamboozled as you are.
"Thank you, Verity."
—Shaun Micallef, to various characters in the first season.
Advertisement:

Shaun Micallef's Mad As Hell (2012 - Present) is something of an Australian version of The Daily Show with some elements of This Hour Has 22 Minutes thrown in for good measure.

Hosted by Shaun Micallef, it features many hilarious and bizarre characters who help him dissect the news and current events of the week. Shaun's supporting cast currently includes Francis Greenslade, Tosh Greensladenote Not related to Francis, Emily Taheny (all since series 1), Stephen Hall (regular since series 2) and Christie Whelan Browne (since series 10)

Previous cast members include Roz Hammond (series 1-10, with guest appearances in seasons 11 and 12), Veronica Milsom (series 1-4) and Michelle Brasier (series 10 and 11). Nicholas Bell appeared in series 6 to cover Stephen who was performing in a stage production of Fawlty Towers while Molly Daniels and Ming-Zhu Hii both appeared in series 9 to cover Roz who was filming The Heights in Perth.

The fifth series ended with Micallef giving a goodbye speech as there had been no news of a renewal or cancellation. The ABC gave the show a late renewal and it effectively began alternating with The Weekly with Charlie Pickering.

This is the longest running show Shaun has fronted - as of May 2022, it has aired 162 episodes (including a one off Christmas special) over fourteen series and ten years. A fifteenth series is set to screen later in 2022, which is to be its last in its current form.