Film / The Man from Snowy River 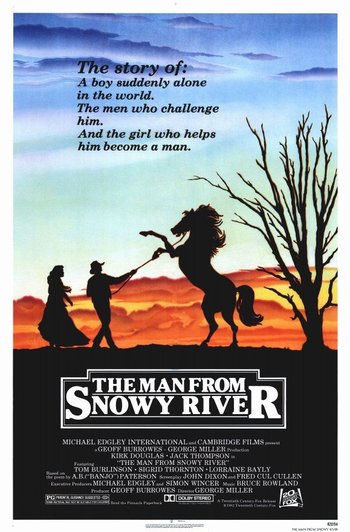 The Man from Snowy River is a 1982 film based on the Banjo Paterson poem of the same name, set in Australia in the late 1800s. It tells the story of the title character, Jim Craig, a stockman from the Snowy Mountains whose dreams of making his living breeding horses are put on hold when the death of his father and the loss of his broodmare to a herd of wild horses (called "brumbies") force him to descend to the lowlands to work as a hired hand on a cattle ranch owned by the wealthy Harrison.

In the process, Jim meets and falls for Harrison's rebellious daughter Jessica, and faces prejudice from both Harrison and the other hired hands over his mountain origins. When Harrison's prized colt is set loose to join the brumbies and Jim is blamed for it, he joins the group of stockmen organized by Harrison to chase the herd down, in order to prove his innocence and his worth.

The film stars Tom Burlinson as Jim Craig, Sigrid Thornton as Jessica Harrison, and Kirk Douglas in the dual roles of Harrison and Harrison's crippled brother Spur; it features a score by Bruce Rowland and a lot of impressive Australian scenery.

A sequel was released in 1988, titled The Man from Snowy River II in Australia and released as Return to Snowy River in the US. The sequel picks up Jim's story upon his return to the Snowy River region and deals with his efforts to get his horse-breeding business off the ground and resume his relationship with Jessica, who now has a competing suitor in the person of a banker's son, Alistair Patton. Kirk Douglas did not reprise his role as Spur and Harrison, and was replaced in the latter role by Brian Dennehy.

The films inspired a spinoff TV series, Banjo Paterson's The Man from Snowy River (Snowy River: The McGregor Saga in the US), which focuses on a different cast of characters in the same general setting.

The films provide examples of the following tropes: