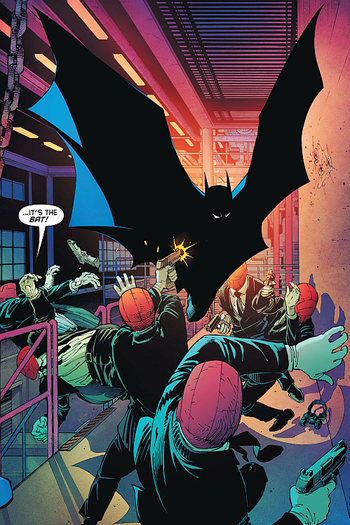 They should have fled.
"Keaton always said, 'I don't believe in God, but I'm afraid of Him.' Well, I do believe in God... and the only thing that scares me is Keyser Söze."
— Verbal Kint, The Usual Suspects
Advertisement:

A villain or Anti-Hero whose primary characteristic is the fear the other side has of them.

To be the Dreaded, a character has to be far and away the most feared person in the story. These are people who make you quail not because of anything they are doing at that moment, but simply because you know who they are and what they're capable of... and sometimes the latter part is optional. Maybe this character has a reputation as a Hero Killer; a person who kills the other side's strongest and noblest supporters. Maybe they use fear as a magical effect which triggers panic in others. Maybe they've done so many horrible things that nobody ever wants to speak of them again. Maybe they are simply so mind-breakingly horrible even the strongest of hearts falter. But the defining trait of the Dreaded is that they are feared. Probably has a scary name, unless they use a really scary alias instead. If their ability in combat lives up to their reputation, then the only choice one has when facing them may be to Run or Die. When/if the Dreaded character dies, his/her/its death will almost certainly be followed by much rejoicing...if he's actually dead, that is.

One of the character's biggest advantages is how the terror they inspire in their opponents undermines the foes' ability and willingness to fight. If they end up fighting someone who is not afraid of them, the Dreaded's opponent might actually be able to fight them more evenly.

Although there are exceptions, (particularly on the other side of the fence) a key characteristic of this trope tends to be invisibility. In general, characters—villains, in particular—who conform to this trope will not be seen directly the first few times they are mentioned. The show will tend to work on building up their perceived threat in the minds of the audience: a dark, shadowy something that's out there somewhere, but you don't know where, who or what they are, or even whether or not they can be killed, at least at first. As such, it usually involves acceptable forms of Character Shilling. It is possible for them to remain this trope after they come out of the shadows, but if they do not then beware Villain Decay.

Additionally there is a heroic equivalent called the Terror Hero, when there is a hero so renowned that the enemy would rather flee than possibly encounter them. They tend to be anti-heroes of some kind though (ranging from grades 2-4), due to audiences seldom associating dread as an emotion a pure hero inspires. Some criminals also tend to go for this in order to prevent anyone from informing on them.

See also Mook Horror Show; when The Hero is the dreaded to his enemies, this is a common way of demonstrating it. For instances that mix this trope with Eviler than Thou, see Horrifying the Horror. Not to be confused with characters who are merely dreaded, although both tropes may apply to the same character. Compare/contrast Respected by the Respected, where a character is defined by the respect other respected characters have for them. See Supernatural Fear Inducer for when a character can literally induce dread. See Hope Crusher where a character excels at snuffing out hope and/or spreading despair.