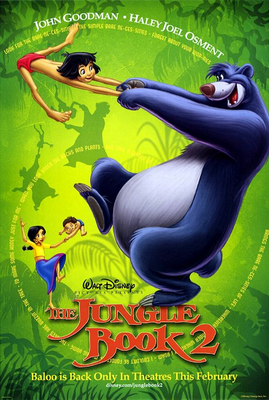 The Jungle Book 2 is the 2003 sequel to Disney's The Jungle Book. Produced by Disneytoon Studios, it is one of their few films to have a theatrical release.
Advertisement:

After being charmed by the village girl Shanti (Mae Whitman) at the end of the last movie, Mowgli (Haley Joel Osment) has since been accepted by the Man Village. Despite being adopted by a loving family, Mowgli still finds himself yearning for his old life in the jungle before he had to follow the rules of his new parents. Baloo (John Goodman) has also found himself missing Mowgli and decides to pay him a visit despite Bagheera's objections. When Shanti mistakes Baloo for a wild predator, he and Mowgli run off to resume their carefree life in the jungle. Worried about Mowgli's well-being, Shanti and Mowgli's adopted brother Ranjan try to find him before anything happens to him. Unbeknownst to Mowgli and his friends, Shere Khan has returned to the jungle, seeking revenge after his humiliating defeat at Mowgli's hands.

Tropes related to The Jungle Book 2:

Mowgli and Ranjan's latest prank gets Shanti so ticked off, she has a "mature" choice of words for them.

Mowgli and Ranjan's latest prank gets Shanti so ticked off, she has a "mature" choice of words for them.