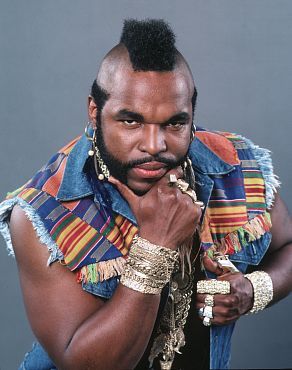 "I pity the fool who messes with me!"
"When it comes to kitschy 80's icons, none is more kitschy than Mr. T. Anyone who grew up in the 80's has got to have a ton of nostalgic affection for the guy. This is despite the fact that T has no talent to speak of. No, people love Mr. T because he's Mr. T. He's famous solely for his personality, and that personality is completely and utterly insane."
—Albert Walker of The Agony Booth (in an excerpt that was probably intended to be unflattering)
Advertisement:

Mr. T (first name Mister, middle name Period, last name T; birth name Laurence Tureaud) (born May 21, 1952 in Chicago, Illinois) is an American actor known for his roles as B. A. Baracus in the 1980s television series The A-Team, as boxer Clubber Lang in the 1982 film Rocky III, as private detective T.S. Turner (paired up with attorney Amy Taler) in the late-80s Canadian series T and T (notable as one of the few live-action projects produced by Nelvana) and for his appearances as a professional wrestler. Mr. T is also well-known for his distinctive mohawk hairstyle, for wearing large amounts of gold jewelrynote After Hurricane Katrina in 2005, he no longer wears the gold jewelry. He said that when he saw other people lose their lives and lose their land and property he felt that it would be a sin before God to continue wearing gold. He felt it would be insensitive and disrespectful to the people who lost everything., and for his tough guy image. He starred in the reality show I Pity the Fool, shown on TV Land, the title of which comes from his catchphrase from Rocky III. He was also seen as Officer Earl Devereaux in Cloudy with a Chance of Meatballs, and as himself, dispensing advice to the World's Craziest Fools on BBC Three. He has also starred in a few commercials for World of Warcraft and Snickers, and even got his own animated TV show.

Veteran actor Robert Vaughn described T as basically a harmless Talkative Loon on the set of The A-Team. Vaughn said that those tendencies quickly grated on the nerves of series co-star George Peppard, who was famously impatient, to the point that Vaughn thought T was slowly driving Peppard insane.

He's a big Momma's Boy. Just don't try and mock him for it. It won't end well. Also, you are now reading this article in Mr. T's voice, suckah!

Mr. T is his real legal name, fool; he even had it legally changed so people would have no choice but to address him as "Mister." You see, Mr. T grew up in an era when white people would call grown black men "boy" - including members of his family. After seeing that done to people around him when they returned from fighting in Vietnam Mr. T said he would not have anything of that and went with his now famous name.

In March 2014, the WWE honored T by inducting him into their Hall of Fame, for bringing pro-wrestling and Wrestlemania to the attention of wider audiences in the 80s.

Mr. T fought cancer at one point, much to the cancer's regret. What kind of cancer you may ask? T-cell lymphoma, fool!

Mr. T is to cool as Chuck Norris is to badass. He could even defeat Chuck Norris, as shown by the following train of logic:

Chuck Norris is a member of the National Rifle Association. The NRA considers Sylvester Stallone (as well as Danny De Vito) a threat to their entire organization, therefore Norris considers Stallone a threat, ergo Base Stallone ≥ Base Chuck Norris. Granted, Chuck Norris would have the sense to train, and we're not even sure how we came to assume any of this to begin with. Sorry about that, fool!

Not only is Mr. T badass but he's also a Playful Hacker. According to a couple of World of Warcraft commercials, he once hacked the game and created a "mohawk" class. Mr. T's pretty handy with computers, fool, but that did not occur to the condescending director.

Speaking of which, he made it clear in one of these Warcraft commercials that "Mr. T has the greatest hair in the world! You can't deny. It's been proven by science, fool!"note cue a computer-generated verdict of "PERFECT"

, and appeared in some after-school specials such as the memetically famous Be Somebody... or Be Somebody's Fool! Results are, of course, heavy on the Narm Charm.

Not related to Mr. T. and Tina

, or to the late-1970s "Mister Tea" sketch by Father Guido Sarducci.note Mr. Tea was, of course, a joke on Mr. Coffee — it was just a ring stand through which you poured hot water (not included) into a pot (not included) with a teabag in it (not included). However, many years later, the world saw the introduction of Mrs. Tea

And make sure that, whatever you do, you stay AWAY from Mr. T's BINS.