Free Prize at the Bottom 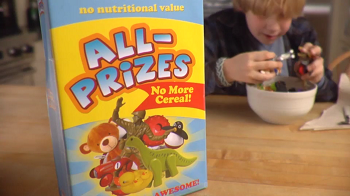 At least as much nutritional value as actual cereal!
"What you do want to look for are cereals with sound effects in the name—"Smacks", "Pops", "Puffs", "Blasts", and, um... "Gunshots in a Crowded Mall". You know, the kind with the squarish sugared pieces of styrofoam they claim are marshmallows. These are guaranteed to have a nice big reach-your-nasty-unwashed-hand-straight-to-the-bottom-of-the-box toy in it."
— Strong Bad, Strong Bad Email #194 "specially marked"
Advertisement:

A once-standard marketing strategy for breakfast cereals and other products meant for children was to put some sort of "prize" at the bottom of the package—typically something plastic and useless, but still pretty cool to the target audience. Cracker Jack

, having started this practice in 1912, was likely the first to do so. Unfortunately, repeated instances of children simply disregarding the notice of a prize contained inside and scarfing down the contents and choking on the toys led to the widespread abolition of this practice, in some cases by legislation, in others on the initiative of the companies manufacturing the product for the sake of avoiding lawsuits. Cracker Jack "Prizes" are now just little paper squares that have little puzzles and stickers on them that even little kids realize are lame, and just end up being thrown away. As a result, the term is nowadays used as an analogy for something very cheap.

Modern examples would involve the prize being packaged outside the cereal box's bag, where the actual cereal is stored, in order to prevent choking hazards and preserve said cereal prize.

In fiction, when characters notice the free prize at the bottom label on their box of cereal (or other package), they will attempt to cash in immediately. This means employing a method of getting past the actual product, such as sticking one's entire arm into the box and digging around while pieces of food fall out. More innovative characters will come up with a less messy method such as opening the product from the bottom. In some cases, they find that the prize is missing and may have already been taken. Sometimes in animation, a character, particularly a Big Eater, will scarf down the prize.

Since this strategy is specifically used to sell to kids (or, more accurately, their parents), it is most often seen referenced in cartoons, comic strips or other media that are considered as being meant for children, although that's not always the case.

For decades, in the United States DUZ detergent was sold with a piece of glassware in the box.

Shokugan is an inversion that exists in Japan. The main product being sold is a good quality toy, packaged with a pitifully small amount of cheap candy or snacks.

The Ur-Example, dating back to the middle ages is the Three Kings Cake

, a cake with a small figurine or other trinket, traditionally meant to represent the Christ Child, hidden inside. Modern King Cakes may include licensed figurines of more contemporary characters.

Competition Coupon Madness is a variant. While that trope deals with the collection of box tops or some other part of a product package and sending away for the prize via mail, this trope is for situations where the prize is immediately available in the package itself.