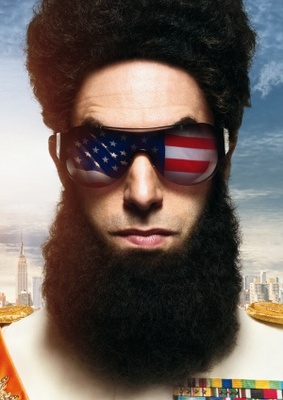 A 2012 movie starring Sacha Baron Cohen doing what he does best — pretending to be a guy from another country (this time ethnically non-specific) who makes fun of other people's ignorance regarding ethnic stereotypes.

In this film Sacha plays Admiral General Shabazz Aladeen of the Republic of Wadiya, a fictional country in North Africa. Aladeen is pretty much the worst head of state this side of Pol Pot (in a funny way of course), but to him it's just everyday life. However when he's invited to give a speech at the United Nations in New York, his Treacherous Advisor Tamir (Ben Kingsley) arranges to have him kidnapped and murdered. Though Aladeen escapes, his captor shaved off his iconic beard, making him unrecognizable.

Now penniless and without status, Aladeen finds himself picked up by Zoey (Anna Faris), a kindly grocery store manager who offers him a job. Hilarity Ensues as Aladeen tries to find a way back to his throne, prevent a 'democratic' constitution being signed by a body double (part of Tamir's plans to sell Wadiya's oil to the highest bidder), and build weapons of mass destruction, all at once.

Not to be confused with the Charlie Chaplin film The Great Dictator, or an aborted TV show concept from the late 80s called "The Dictator" starring Christopher Lloyd.

The Dictator provides the following tropes: