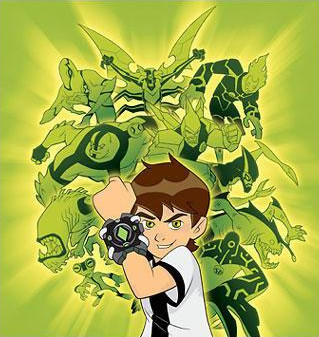 It's Hero Time!note Clockwise from bottom: Ben Tennyson, Grey Matter, Wildmutt, Fourarms, Ghostfreak, Stinkfly, Heatblast, Diamondhead, XLR8, Ripjaws, and Upgrade.
It started when an alien device did what it did
And stuck itself upon his wrist with secrets that it hid
Now he's got super-powers, he's no ordinary kid,
He's Ben 10!
So if you see him you might be in for a big surprise,
He'll turn into an alien before your very eyes,
He's slimy, creepy, fast and strong, he's every shape and size,
He's Ben 10!
All new powers, he's on the case
Fighting off evil from Earth or space.
He'll never stop 'till he makes 'em pay,
'cause he's the baddest kid to ever save the day!
Ben 10!
— Expository Theme Song
Advertisement:

Ben 10 is an American action/adventure series created by Man of Action Studios (a group of comic book writers consisting of Duncan Rouleau, Joe Casey, Joe Kelly, and Steven T. Seagle) that aired from 2005 to 2008. The show revolves around the adventures of Ben Tennyson, a 10-year-old boy who, while on summer vacation with his grandfather Max and cousin Gwen, he comes into the possession of a mysterious alien device - the Omnitrix - that allows him to change into a multitude of alien heroes. At first, there are only ten aliens (hence the name "Ben 10"), but more forms were discovered as the series goes on.

Why isn't the device in more capable hands? Well, once it attached to Ben, it was stuck there. It won't come off. And with that problem established, Ben and his family decide to continue traveling the United States, fighting off evil from Earth or space, all while slowly discovering that Ben getting the Omnitrix may not have been as much of an accident as previously thought and that Grandpa Max may know far more about these alien threats than he lets on. Also, don't worry about Gwen being left out in all this: she eventually gets her own skill set.

The show is notable for being primarily aimed at kids, yet including a substantial amount of Character Development and universe-building, as well as two big Plot Twists in the first and second seasons, respectively.

The beginning of the original continuity in the franchise, three more series follow in this timeline: the Darker and Edgier Time Skipped sequel Ben 10: Alien Force that follows Ben as a teenager, then Ben 10: Ultimate Alien (which immediately follows the events of Alien Force), and finally the Lighter and Softer Ben 10: Omniverse that immediately follows Ultimate Alien. The foursome who created the original series went on to create Generator Rex, and later work on Ultimate Spider-Man, before returning to reboot this series with Ben 10 (2016).

The original series also has three television movies based on it; Ben 10: Secret of the Omnitrix, which serves as the canonical Grand Finale of the original series,note the movie aired during the middle of the final season, with the last episode of the series to air being a What If? story months later an Alternate Universe Live-Action Adaptation Ben 10: Race Against Time (notable for starring Lee Majors as Grandpa Max), and a 2012 all-CGI film called Ben 10: Destroy All Aliens that was later Ret Canoned.

Not to be confused with the Bren Ten.

"Don't you get it? You don't need that thing. What about all the times you saved Grandpa, or me, or lots of other people when you weren't an alien? You are a hero, even if you can't go hero!"
Feedback

Wildvine has the ability to quickly tunnel underground thanks to being a plant. He uses this to ambush the werewolf, and drags it through several meters of dirt and rock after it bites him.

Wildvine has the ability to quickly tunnel underground thanks to being a plant. He uses this to ambush the werewolf, and drags it through several meters of dirt and rock after it bites him.