All spoilers below are unmarked. You Have Been Warned. 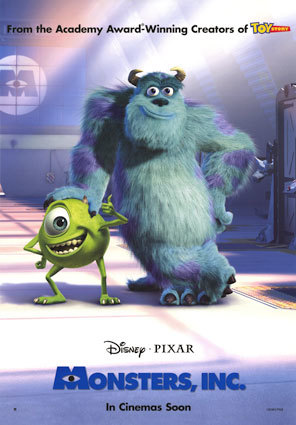 Monsters, Inc. is the fourth animated film produced by Pixar. It is directed by Pete Docter, with the screenplay by Andrew Stanton and Daniel Gerson, and the story by Docter, Jill Culton, Jeff Pidgeon and Ralph Eggleston. It was released on November 2, 2001.

Welcome to Monstropolis, a world where the monsters are just regular folks like you and me. When they hide in your bed/closet/hamper and scare you, it isn't because it gives them any sort of thrill, but simply because it is their job. Their world, linked to ours through closet doors, derives all its electrical power from our screams.

However, scaring children isn't safe or easy work. The monsters believe that human children are highly toxic and only the bravest and most talented venture into a kid's bedroom. The populace live in terror of the possibility that a kid might find their way back through the door into the city, especially since this generation of kids are harder to frighten due to violence becoming more commonplace in media, and kids becoming desensitized, as a result. The difficulty in scaring children and the constant scrutiny of the CDA (Child Detection Agency) has led to a power shortage as Monsters, Incorporated, a major energy company using screams as their power source, struggles to keep the city lit.

Now meet our heroes, James P. "Sulley" Sullivan (John Goodman) and Mike Wazowski (Billy Crystal). Sulley, the big blue one, is the top "scarer" at Monsters Inc. Mike, the small green one, is his partner (who handles the paperwork), best friend, personal trainer, and roommate, who spends his after hours courting the receptionist Celia (Jennifer Tilly). They also happen to be days away from breaking the All Time Scare Record.

Life is great — until one of the extremely poisonous fuel sources enters their world and threatens everything. Yes, a human child! Doom-doom-doom! (Actually, she is rather adorable.) Sulley and Mike's friendship becomes increasingly strained as they try to get the little "terror" back to her world without getting contaminated or arrested. Along the way, they stumble upon a conspiracy that threatens to undermine their life's work — and possibly their lives.

A prequel was released twelve years later in 2013 titled Monsters University, which centers around Sulley and Mike in their college days.

A follow-up DVD short, Mike's New Car, was released with the Monsters, Inc. DVD. There also is a comic book sequel titled Monsters, Inc: Laugh Factory. A Spin-Off television series titled Monsters at Work premiered on Disney+ in 2021, which is an Immediate Sequel set the day after the events of Monsters Inc.. The world of the film was also featured in Kingdom Hearts III with an original story taking place after the events of the film.