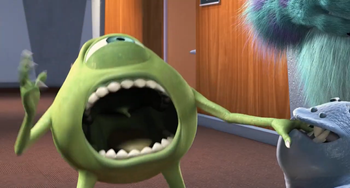 How a fan supports his favorite Scarer: biting at the hand that feeds him.
Moment pages are Spoilers Off. You Have Been Warned.
Advertisement:

For a movie about monsters, it sure delivers a lot of laughs. Heck, it's basically the the closest movie Pixar has made that focuses only on comedy (though it has its emotional tones).