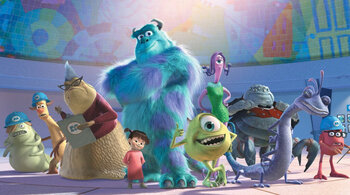 For characters introduced in the 2013 prequel, see the Monsters University page.

For characters introduced in the 2021 series, see the Monsters at Work page.

All spoilers in Roz and Henry J. Waternoose III's entries are unmarked. You Have Been Warned. 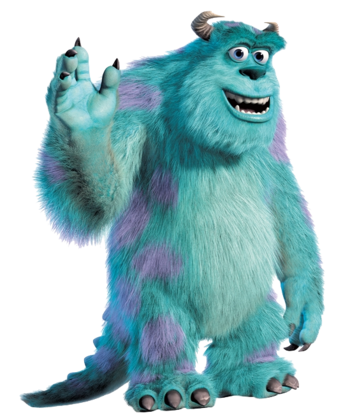 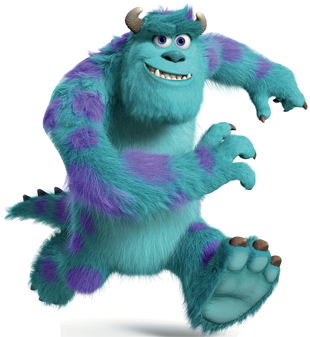 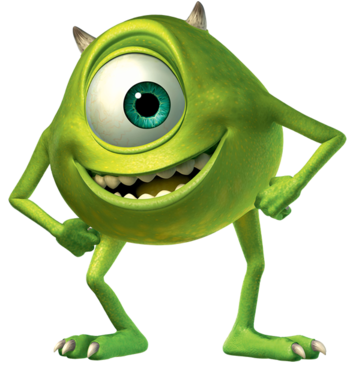 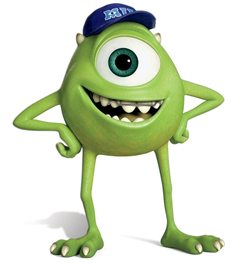 "Kitty!"
Voiced by: Mary Gibbs
Dubbed by: Lola Krellenstein (European French), Catherine Léveillé (Canadian French), Alicia Vélez (Latin American Spanish), Kaori Mutsuda (European Spanish), Ana Elena Bittencourt (Brazilian Portuguese)
A human toddler who fears virtually nothing (except for Randall, that is). She accidentally enters the monster world when Sulley inspects her door at the Scare Floor, setting Mike and Randall to find a way to send her back to her house.
Advertisement: 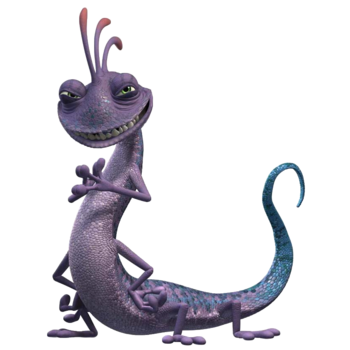 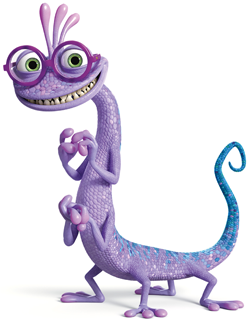 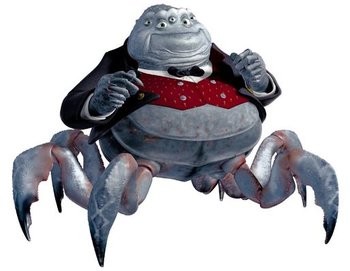 "There is nothing more toxic or deadly than a human child."
Voiced by: James Coburn
Dubbed by: Richard Darbois (European French), Vincent Davy (Canadian French), Maynardo Zavala (Latin American Spanish), Miguel Ángel Jenner (European Spanish), Ednaldo Lucena (Brazilian Portuguese)
Waternoose is an elderly, grey-skinned, overweight monster with five eyes, seven digits on both hands, and six crab-like legs. He is the CEO of the eponymous company, a retired scarer, Sulley's mentor, and the boss of every character who works for the company. His plans to rejuvenate the company hide his sinister ambitions...
Celia Mae 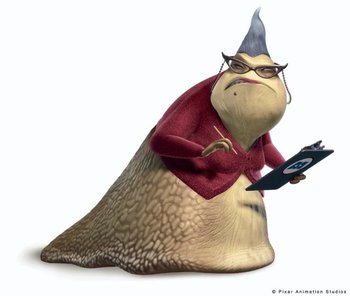 "Wazowski, you didn't file in your paperwork last night."
Voiced by: Bob Peterson
Dubbed by: Isabelle Leprince (European French), Johanne Garneau (Canadian French), Humberto Vélez (Latin American Spanish), Carmen Contreras (European Spanish)
An elderly, bespectacled, slug-like monster with yellow skin, grey hair who wears a red shirt. She arranges the paperwork for the Scare Assistants, most notably those that work on Scare Floor F. It turns out that she is Agent number 1 of the CDA, who started working undercover at Monsters, Inc. two and a half years ago prior to the film's events to uncover a rumoured conspiracy regarding the company. Also has something to say here.
Jeff Fungus 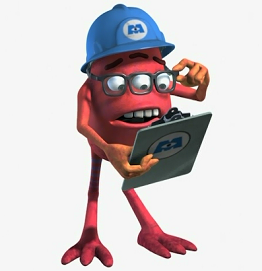 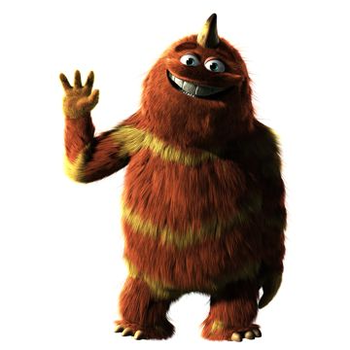 "Keep the doors coming Charlie, I'm on a roll today."
Voiced by: Sam Black (Monsters, Inc.), Stephen Stanton (Monsters at Work)
Dubbed by: Boris Rehlinger (European French), Hubert Gagnon (Canadian French, Monsters Inc.), Mario Filio (Latin American Spanish)
A large monster with orange fur, yellow stripes, and a singular horn on his forehead. He works as a Scarer for Scare Floor F, and is the victim of a series of accidents regarding human accessories.
Ms. Flint 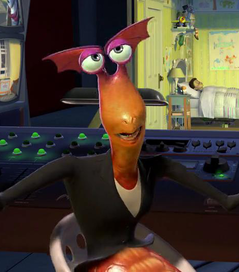 Voiced by: Bonnie Hunt
Dubbed by: Évelyne Grandjean (European French), Anne Bédard (Canadian French), Rebeca Patiño (Latin American Spanish), Geni Rey (European Spanish)
A pinkish-orange snakelike monster with fins attached to back of her eyes (which are on stalks), who works as a supervisor of the Scare Simulator, where potential Scarers try out the skills.
Smitty and Needleman 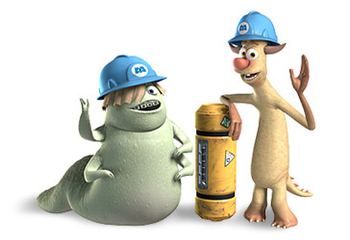 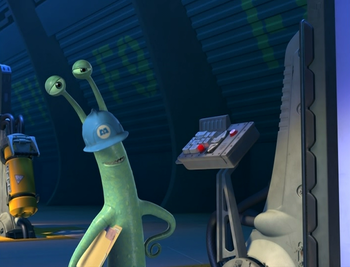 "2319! We have a 2319!"
Voiced by: Phil Proctor
Dubbed by: Mauricio Bennetts (Latin American Spanish)
A turquoise monster with snail-like eyes and seven tentacle limbs (five of them being legs) that works as George's scare assistant.
Thaddeus "Phlegm" Bile 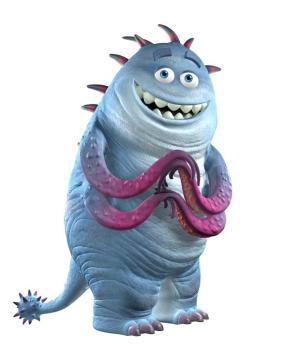 Voiced by: Jeff Pidgeon (Monsters, Inc.), Christopher Swindle (Monsters at Work)
Dubbed by: Héctor Alcaraz (Latin American Spanish)
The very first monster seen in the movie. He has a bloated physique, a greyish-blue colour scheme, an Ankylosaurus tail, several pink spikes on his body, and four pink tentacle-like arms. He is a trainee Scarer who is very clumsy in his attempts at scaring children.
Jerry Slugworth 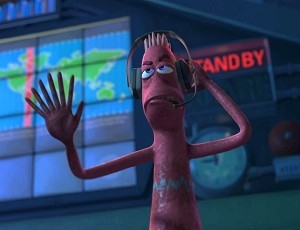 "We're on in seven, six, five, four, three, two..."
Voiced by: Steve Susskind
Dubbed by: Raúl Anaya (Latin American Spanish)
A humanoid monster with red skin, blue stripes around his body, vertical spikes that resemble hair, and seven digits on both hands. He works as the supervisor for Scare Floor F, and announces when scaring starts and when it ends.
Other Scarers

Voiced by: Joe Ranft (Claws), unknown (Lanky & Ricky)
Background characters with little to no actual purpose to the story. All of the other Scarers seen in the film work on Scare Floor F alongside Sulley, Mike, Randall, Fungus, George, and Charlie.
Scare Assistants 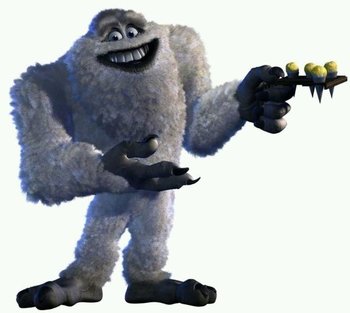 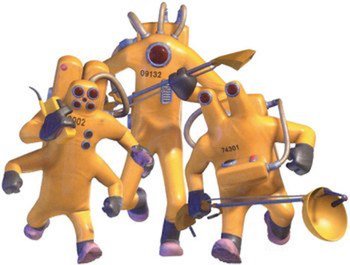 "We can neither confirm nor deny the presence of a human child here tonight."

Short for "Child Detection Agency", this group of yellow Hazmat suit-wearing monsters has the responsibility of eliminating all traces of human objects present in the monster world. Their methods of decontamination are often painful, and they will take extreme measures to prevent the spreading of human toxicity.